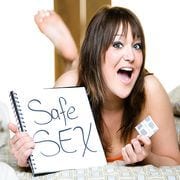 How to talk about STDs with your partner

It’s the dreaded conversation for any relationship – and it’s not the, “I love you” or the “let’s see other people” conversation. But, the uber-uncomfortable and often frightening, “let’s get tested” talk.

Getting tested isn’t something anyone looks forward to, but it is essential in maintaining your health and well-being. The reality is that college is a haven for carefree sex among us young adults finding our way into adulthood, and being propelled by “The Hills” and “Gossip Girl.” Unfortunately, too many of us assume that using protection is enough. Well it’s not.

One day, I received a text from one of my closest friends asking if he should get tested after he heard that the girl he hooked up with at a frat party the weekend before had Chlamydia. Luckily it was just a vicious rumor, but it exposed a dark secret that I had already been suspicious of: my friend had never been tested for any STD, let alone getting the test.

It’s one thing to go through the motions of getting tested when no one knows but you and the anonymous tester, but to actually discuss getting tested – and the final results – with another person isn’t as sexy as that hot late-night rendezvous in your dorm room.

But when do you have the talk? It’s not like you know when you will do the deed… well sometimes you do. In my opinion, it depends on where you see the relationship going. If it is just a party hook up and you play safe, then no worries. I know some might call me irresponsible for not suggesting you take every one night stand to get tested for STDs, but let’s be real, that’s not how it works.

If you know you want to pursue something more with the individual, you need to get tested before the relationship gets sexual. Too many of us wait to have the conversation after the intercourse has come and gone (pun intended).

As for hook ups… if any of you are hooking up with random strangers, make sure you at least get their status – even if you can’t recall their name. Be blunt. Ask, “When was the last time you were tested?” “What were the results?” If they don’t have answers for you, they don’t get any from you. It’s that simple.

When it comes to your partner, I prefer taking the honest approach. Consider getting tested together. It shows that you are serious and they would probably feel more comfortable if they knew you were going through the process right alongside them.