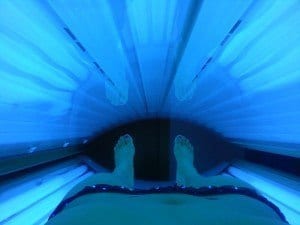 You have better chances out in the sun

Snooki had the right idea–to stop self-tanning. It was once thought that spray-on tans were a safer alternative to sunbathing in the sun, but a new study shows it may not be.

UV rays from the sun can cause accelerated skin aging and, in extreme cases, skin cancer. According to medical experts, the chemical used in spray-on tans—dihydroxyacetone (DHA)—can cause genetic alterations and damage one’s DNA.

Dr. Rey Panettieri, a toxicologist and lung specialist, told ABC News, “I have concerns…The reason I’m concerned is the deposition of the tanning agents into the lungs could really facilitate or aid systemic absorption—that is, getting into the bloodstream.”

Panettieri was one of six medical experts on a panel who voiced concerns. Other medical professionals across the board—dermatology and pulmonary health—have read through reports and literature about DHA and believe that serious health concerns can come from spray-on tans.

The panel of medical professionals read through 10 scientific studies of DHA—none involved human testing. The studies monitored the results of cells after being treated with bronzer additives.

Dr. Lynn Goldman, the dean of the School of Public Health at George Washington University told ABC News, “What we’re concerned about is not so much that reaction that creates the tanning, but reactions that may occur deeper down with living cells that might then change DNA.”

The FDA approved the use of DHA in the 70s but only in lotion and cream form. Salon spraying is not approved by the FDA—they recommend looking for an alternative to tanning beds.

“This would be a function for OSHA or state/local public health regulators, much as for hair or nail salons. FDA has oversight responsibility for the safety of the cosmetic products and the devices (UVA light sources and beds) in the indoor tanning salons.”

Dr. Donald Morton of the John Wayne Cancer Institute in California said, “If anything, I think tanning outside is safer.”