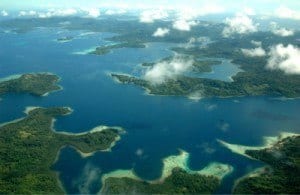 The Solomon Islands were the epicenter of another devastating beneath-the-sea earthquake that sent an unstoppable tsunami rocketing toward their shores. The earthquake was quickly rated as an 8.0 magnitude in scale, and officials say at least four people have lost their lives to the ensuing tsunami. So far, at least 100 homes on the edge community of Lata were totally devastated by the waves of destruction. Water and power outages remain a significant problem for those lucky enough to have survived.

Thousands of residents of New Zealand had been swimming in the sea at the beach, totally oblivious to the tsunami potential they could have faced had the earthquake been caused by a horiztonal shift in the plates, rather than the vertical shift that occured.

I mean, you get the story. Earthquake = Tsunami = Large humanitarian crisis. Donate to help out the struggling families over there, would you?