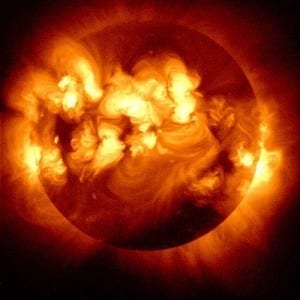 Solar storm is largest since 2005

The largest solar storm since 2005 is now hitting Earth, whether you realize it or not.

Gizmodo reports that the solar storm is causing fluctuations on the power grid and is disrupting the Global Positioning System. The solar storm has also resulted in a proton storm and a Coronal Mass Ejection. The radiation and geomagnetic storm caused by the CME is normal, but proton storms are very rare, especially at this level.

The storm is already affecting air traffic and satellites.

“Many airliners have been avoiding the North Pole routes because they are more exposed to the proton storm, which disrupts High Frequency radio communications,” NOAA’s Space Weather Prediction Center physicist Doug Biesecker said.