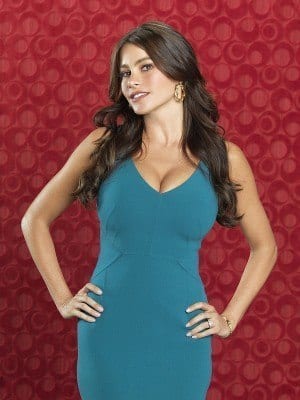 Sofia Vergara is the highest paid woman on U.S. television between May 2011 and May 2012 with an income of $19 million, according to Forbes.

Sofia Vergara beat out Kim Kardashian and Eva Longoria to be named the highest grossing actress on television.

The actress just turned 40 and celebrated with a week-long vacation in Mexico where it is rumored she may have become engaged to longtime boyfriend Nick Loeb.

Between her ABC hit, Modern Family, which is averaging 12 million viewers in its third season, a number of endorsements and licensing deals and the media company she co-founded in 1996, LatinWE, which just had its highest earning year with $27 million in revenues, Sofia Vergara is now the highest paid actress on television.

Sofia Vergara brought in $7 million from her hit show Modern Family and $12 million from endorsement deals, in both English and Spanish. Kmart alone is paying Vergara $7 million for the clothing line she lends her name to.

Forbes called the Modern Family star “the cross-over star [television’s] been waiting for since Desi Arnaz left the airwaves.”

“The truth is out that we’re in this country and we’re taking over,” Sofia Vergara told Forbes. “To see people paying attention to the cultural changes . . . is fantastic.”

Kim Kardashian ranked No. 2, according to Forbes, with $18 million earned during the year, most deriving from Keeping Up With the Kardashians, her perfume and clothing line.

Another Latina actress also appeared on the list of highest earning actresses, Eva Longoria came in third with $15 million. Each of the Desperate Housewives lead women earned an estimated $8 million for the final season, according to Forbes, but Longoria earned far more than Felicity Huffman, Teri Hatcher and Marcia Cross (all three fell within the top 10) as endorsement deals with L’Oreal and Pepsi Next earned her $5 million, in addition to revenue from sales of her cookbook, two fragrances and a handful of movie roles.