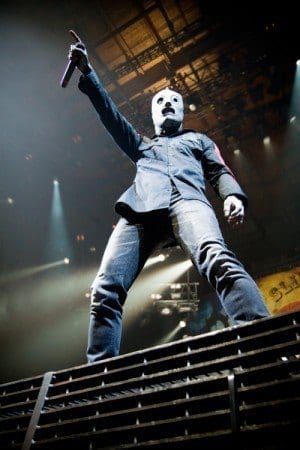 Last October, lead vocalist Corey Taylor of Slipknot spoke with ArtistDirect and teased fans by saying, “Slipknot is looming on the horizon.”

Fortunately for fans, he wasn’t lying.

Slipknot is finally making a comeback with their latest single, “The Negative One.”

The track was originally posted to the band’s website and is the first sign of new music from the group since the death of bassist Paul Gray, and the departure of drummer Joey Jordison.

“The Negative One” recalls Slipknot’s past with its signature menacing vocals, chugging guitar riffs and heavy groove but is also a taste of what fans can expect from their forthcoming album, the first since 2008’s All Hope Is Gone.

In December of 2013 the band released a statement noting the departure of Joey Jordison.

“It is with great pain but quiet respect that for personal reasons Joey Jordison and Slipknot are parting ways,” the band wrote.

The band will release a video for “The Negative One” on August 5th. Listen to the track below: