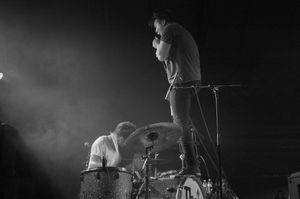 On December 10’th, hundreds of fans waiting anxiously in line outside of Centennial Hall in Dallas, Texas for the fourth annual Unsilent Night. The headliners included The Maine, All Time Low, The Chariot, Attack, Attack and As Cities Burn but you could tell by just looking at the crowd the kind of genre that would be playing. Centennial Hall looked like a huge warehouse on the inside, full of dark clothes and lovely sounds with two main stages inside a smaller one outside. For the most part, most of the bands I saw were great, but there were a few bands that really stuck out such as Listener, The Chariot, Oh Sleeper, and of course, As Cities Burn.

Since UN4 marked the first reunion show of As Cities Burn with their original line-up, I am convinced the crowd would have significantly decreased if they would have not played. When asking individuals what band they wanted to see the most: “As Cities Burn” was the common response. I remember being amazed when I saw them at 14 years old and that amazement was brought back to me during their set. Tears were among the crowd when they played as they performed tracks from their first album, Son I Loved You at Your Darkest.

It was a smart decision to add Listener to the line up simply because he sounds different than any other band there. I have seen Listener a few times before but he never ceases to thoroughly impress me since Dan Smith is an expert at mixing his music with poetry.

Despite the rules and the security guards, fans still made giant circles to hardcore dance in and crowd surfed repeatedly, especially for the Chariot – who gave an intense performance to say the least. There was trouble when they were setting up, but that did not stop them from giving it their all. While waiting to perform, the bassist Jon Kindler recited a tongue twister and Dan Smith from Listener performed a poem.  When they started to play, you could feel the energy from a mile away especially since the guitarist played a good bit of the set in the food court. For the most part, I would say the festival was very fun. The bands and all the people were so excited to be there – until next year keep on rockin’, folks.