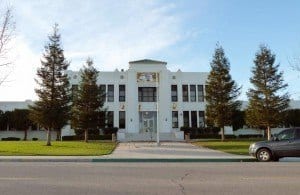 A shooting occured early Thursday morning in central California at Taft High School. A 16 year old opened fire and managed to critically injure one student before being taken down by a teacher, who suffered a grazed bullet to the top of his head. The shooting started around 9:30pm, when the suspect lightly wounded two other students.

The student who was the only critical injury in the shooting  — also 16 — was airlifted to Bakersfield for immediate medical attention after sustaining a bullet to the chest. The suspect had apparently planned out every move in advance, purposely showing up late to class with a shotgun. Fortunately, he missed his initial targets, giving the teacher of the 28-student class time to take down the shooter.

Immediately after the first rounds of the Taft high school shooting, horrified and confused students and faculty were evacuated from the premises to a nearby football field where they waited to be picked up. In between 911 calls, some students frantically called their parents about the shooting that had unfolded.

“There’s just blood everywhere,” one shocked student told her mother on the phone.  “My friend’s been shot, my teacher has been shot.”

The timing of the shooting is especially cryptic, coming at the exact same time Vice President Joe Biden met with victims of previous gun violence incidents as a part of his ongoing campaign to craft new gun control legislation. This thankfully deathless shooting will no doubt play a large role in the discussions on gun control.

The names of the shooter, victim, and teacher have not yet at this time been released by the authorities.

Previous ArticleBaseball Hall of Fame gets no new members for first time in 17 yearsNext ArticleAre you thinking about driving after the bar?