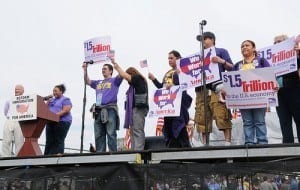 Activists in Youtube videos admit to being paid $11/hr

SEIU activists protesting a Mitt Romney presidential rally in Bedford, Ohio Sept. 26 are seen in viral videos telling Romney to “go home,” and as it turns out, they were paid to.

Both videos that went viral on YouTube feature supporters of Barrack Obama, and the video that reporters see as proof the Service Employees International Union (SEIU) workers were paid to rally has several workers being asked where SEIU picked them up to come to the rally and how much they were getting paid that day to protest.

The amateur filmmaker who released the revealing footage of SEIU workers protesting the Republican presidential candidate said that they were picked up that morning from around the community, and paid $11 dollars an hour to protest. The protesters held signs that said “SEIU for OBAMA 2012” and shouted “we don’t need no bad economy!”

The first video that went viral under YouTube user RealFreedom1776, which is where the Andrew Breitbart-inspired filmmaker promotes his videos, according to the DailyCaller.com, showed a SEIU worker protesting against Romney. Her case against him and for Obama? Obama phones.

In the video, the woman is passionate about what she calls her “Obama phone,” which, according to the video, is provided to those on social security, disability and with low income.

Both videos are bringing attention to the issue of paid protesters, and this is not the first time SEIU workers have admitted to being paid to protest, according to the Examiner. It was reported in March that SEIU workers were overheard discussing their pay when they protested the Supreme Court.

Both videos can be seen on YouTube channel RealFreedom1776.