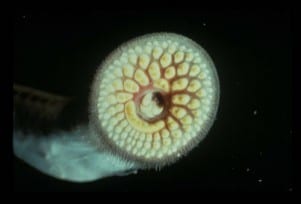 The toothed terror of New Jersey shores debuts on Reddit

Sea Lamprey photos were not a trailer for the next revivalist Sci-Fi pulp movie, but instead terminology for that eyeless many-toothed wunder-monster a poor soul hooked while innocently fishing in New Jersey.  Reddit user jlitch posted pictures of the unidentified sea lamprey to an appreciative community of millions of viewers by now.  The sea lamprey is shown in all it’s teethed combined genitalia looking beauty with the beautifully succinct caption, “Friend…caught this fishing in NJ.”

This photo specimen of the sea lamprey beautifully displays the monster’s rows of predator’s teeth, with which the sea lamprey latches onto its prey and secretes digestive fluids to slowly eat away and break down their victims.  A typical sea lamprey is 2.5 to 3 feet in length, and apparently only one out of seven fish or humans are likely to survive a meeting with this gruesome gurgitator.  The sea lamprey is a native parasite in the waters of the northern Atlantic Ocean.

A spokesman of New York Department of Environmental Conservation was quoted as saying, “The photo doesn’t allow counting of gill openings (seven per side for sea lampreys), but based on size alone, this does appear to be a sea lamprey”.  The spokesmen also lamented Cutler’s (jlitch) rash dash for fame on Reddit, remarking that perhaps the New Jersey resident should have alerted authorities about the presence of this monstrous creature in neighborhood waters, rather than pandering to a community in which, let’s face it, you’ll be old sea who-sey news tomorrow.  Stay tuned for the sea lamprey revenge campaign, and please take heed and avoid New Jersey waters.