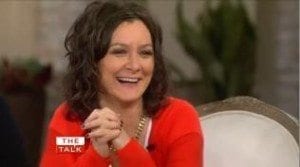 Sara Gilbert’s face was red on “The Talk” when the subject suddenly turned to her sexuality.

Sara’s sister, Melissa Gilbert, made an appearance on “The Talk” and was caught a little off guard when co-host Sharon Osbourne asked, “On the subject of love and relationships. When did you first realize that your beautiful sister loved vajayjay?”

The audience and co-hosts laughed as Sara laughed and appeared a little embarrassed.

“You know what, I’ll put it to you this way. … I took her to dinner when she was in her teens and I sat her down and I gave her this long speech about how much I love you and it doesn’t matter and you’re my darling and blah, blah, blah and you can tell me anything. And she looked and me and she said, ‘I’m not gay.’ And I was like, ‘OK, whatever,’” Melissa said, adding that Sara admitted to it years later and that she always kind of knew.

Sara laughed the question off by asking, “Don’t we have a break coming up?”

As we reported previously, Sara Gilbert is now dating Linda Perry. You can watch Sara Gilbert, Melissa Gilbert and the rest of “The Talk” co-hosts in the video below.