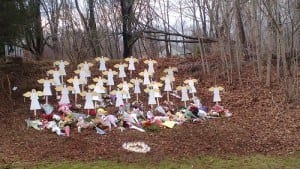 Did the Dec. 14 shooting really happen the way it was reported?

The Sandy Hook Hoax is becoming something more and more people are subscribing to. It is the belief that the Dec. 14 Sandy Hook Elementary School shooting in Newtown, Connecticut never really occurred the way law enforcement officials and media outlets reported it. Believers of the conspiracy theory are calling themselves “truthers.”

These truthers are promoting the Sandy Hook Hoax primarily by using photographic “proof:” an image of a girl they insist is deceased Emilie Parker, one of the victims of the shooting, sitting next to President Barack Obama after the shooting occurred. According to the girl’s parents, the girl in the photograph is Parker’s little sister.

The truthers also believe that 69-year-old Newtown resident Gene Rosen, who took in six children after they fled the elementary school, fabricated the story. Rosen told Salon.com he is receiving phone calls and emails about the incident from truthers and that he and his wife fear for their safety. Sandy Hook Hoax truthers are referring to Rosen and others involved in the tragedy and its aftermath as “crisis actors.”

Fox News correspondent Ben Swann said he believes Adam Lanza was not the only shooter involved in the incident. He is joined in this belief by Florida Atlantic University college professor James Tracy, who blogged about his ideas that the media is missing the facts on the shooting and that some of the facts were made up entirely.

Some of the truthers believe the Sandy Hook Hoax was put on by the government and involved four Israeli Special Forces members as shooters.

“There must be some way to morally shame these people, because there were 20 dead children lying an eighth of a mile from my window all night long,” Rosen said to the National Post.

Gather.com writer Linda Shaw said that she agrees the truthers need to be shamed for their accusations.

“It’s really sad that people are going to such lengths to disprove the shooting, even dubbing it the Sandy Hook Hoax,” she said. “They should just stop for a moment and think: If this is real and it really did happen, how am I making these families feel? Am I increasing their pain and suffering ten-fold? The answer is yes, and those who are doing so should be ashamed of themselves.”

In the mean time, the debate over gun control the Sandy Hook shooting contributed to continues. New Jersey City University professor James Broderick said the truthers are exploiting the tragedy for political purposes.

The truthers of the Sandy Hook Hoax continue to support their beliefs, claiming that to accept answers provided by the government and the media is irresponsible and that people should be looking deeper for their own answers.