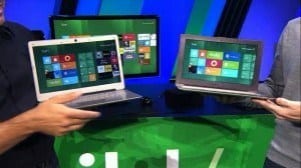 Samsung has announced that it will release three new all-in-one PCs designed for the newest Windows operating system this fall.

The all-in-one PCs will feature 10-point touch screens and a built-in webcam that can recognize five separate hand gestures from up to three feet away. For example, a midair swipe can turn an e-book page, while a clockwise motion turns up the volume.

There’s been a lot of buzz about Windows 8 getting rid of the Start menu, but Samsung’s new all-in-one PCs have a solution for Windows users who are wary of that particular change. The S Launcher, a widget exclusive to the Samsung models that is reminiscent of the Mac dock, will give users easy access to files and programs they use often. It will also feature a search bar to facilitate navigation of the new system.

Samsung is marketing its Series 5 all-in-one PCs as kitchen computers because of their slim design and a keyboard and mouse that can slide under the monitor to free up counter space. The message, really, is that these PCs are designed to fit anywhere.

Samsung’s Windows 8 laptops are set to be revealed next week.