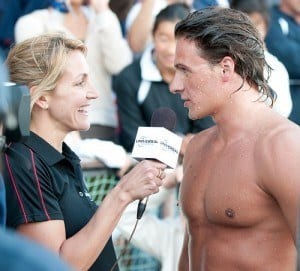 This past Saturday, Family Guy creator Seth MacFlarlane portrayed Olympic swimmer Ryan Lochte during a segment called Weekend Update on SNL. However, Lochte wasn’t too pleased with the way in which he was portrayed. In the skit, MacFarlane impersonated Lochte as an airhead attempting to review several new TV shows.

Of course in true SNL fashion, Lochte was portrayed as a giant idiot referring to the new show Go On as “Goon.” MacFarlane went on to say “Hey Seth, do you wanna know a secret? If you hold your ear up to my ear, you can hear the ocean.” This spot-on impression of Ryan Lochte seemed to be funny to just about everyone except Lochte himself.

Ryan Lochte defended himself by saying “I think they got me all wrong on there. Hopefully, I’ll get the chance to go on SNL to redeem myself.” However, the swimmer is being a good sport about the whole thing. He went on to say “Well, I gotta admit that was a pretty harsh one, but it’s cool to have Seth parody me. I think he pegged me wrong, but when I heard he did a skit I knew I was in for it!” It may have been harsh, but based on Lochte’s past interview skills, it seemed fairly accurate.

Joseph Gordon-Levitt with musical guest Mumford & Sons are to appear on SNL this weekend airing at 11:30/10:30c on NBC.