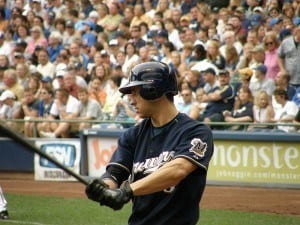 Ryan Braun is spared from what would have been a 50-game suspension. In October, the Milwaukee Brewers outfielder had submitted to a urine sample that revealed abnormally high testosterone levels.

Typically, such findings are kept confidential while a player uses his appellate rights, but in Ryan Braun’s case the result was leaked by ESPN’s “Outside the Lines” on December 10.

In a statement last week, Ryan Braun proclaimed, “We won because the truth is on my side. The truth is always relevant and at the end of the day, the truth prevailed. I am the victim of a process that completely broke down and failed in the way it was applied in this case.”

Ryan Braun’s suspension was overturned on an appeal based on a technicality. The basis of the appeal was that the sample collector, Dino Laurenzi Jr. decided to store the samples in his home for more than 40 hours over the weekend of October 1, rather than immediately delivering them to a nearby FedEx for shipment.

Ryan Braun said a press conference that he had learned a lot of things about the collector and the process that “made us very concerned and suspicious about what could have actually happened.” Braun said he was told that if anyone with access to the sample was “motivated”, tampering with the sample would have been easy.

Ryan Braun is claiming that the events have severely damaged his image and has mentioned that he is considering legal action against the Laurenzi and those he believes leaked the results to ESPN. The same can also be said of the sample collector, however, regardless of whether or not he did tamper with the sample, his reputation is tarnished.

In a statement issued Tuesday, Laurenzi said, “Given the lateness of the hour that I completed my collections, there was no FedEx office located within 50 miles of Miller Park that would ship packages that day or Sunday. In that circumstance, CDT has instructed collectors since I began in 2005 that should safeguard the samples in their homes until FedEx is able to immediately ship the sample to the laboratory, rather than having the samples sit for a day or more at a local FedEx office.”

MLB has supported Laurenzi, saying in a statement that, “The extremely experienced collector in Mr. Braun’s case acted in a professional and appropriate manner. He handled Mr. Braun’s sample consistent with instructions issued by our jointly retained collection agency.”