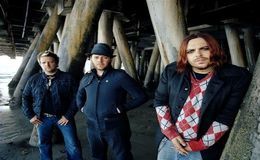 New goodies from Seether, Danger Mouse and Hank Williams round out this week

Two more weeks until your faces are stuffed with barbecue, potato salad, cole saw, pop and whatever edible delicacies you’re able to swallow without choking to death. Before you indulge, let me show you some music that’ll get you in the munching mood. I think. Ok, I’m not sure, but just take a look anyway.

Seether has always been one of those bands whose sound is so distinctive you can recognize them by listening to the first couple of seconds of their songs. With this latest entry, the band has taken its style to another level with their single “Country Song”.  If you haven’t been living under a rock, you know what I’m talking about. Seether pulled up its collective pants, said eff it and did a song that included a twangy, countrified guitar. Their entry into redneck-ville aside,  “No Resolution” assures the fans that they haven’t lost their minds.

Here you have Danger Mouse — beatmaker and producer extraordinaire — responsible for the beats behind MF Doom, Jay-Z (without his permission), Gorillaz and, of course, Gnarls Barkley. Also here is Italian composer Daniele Luppi, whose work can be heard on the big screen in “Sex in the City” and “Nine”.  Together, they conjured a work that is a unique blend of trippiness and classical smoothness. With the backing of the same orchestra that recorded the score of “The Good, The Bad, and the Ugly”, this is shaping to be something that will be never be heard before.

Whenever you feel your music is coasting by on mediocrity and blandness, Ben Harper can be counted on to smack the back of your head and wake your ass up. “Give Till It’s Gone” is no exception. Blending so many genres that he probably created a couple in the process, Harper fuses some folksy with the rock-n-roll in the single “Rock N’Roll Is Free.” You can look at the titles – such as “I Will Not Be Broken” and “Don’t Give Up On Me Now” – and you can tell he’s putting out some positive vibes towards his listeners.

And now we do a swan dive off the positivity of Ben Harper to the boozed-soaked, cocaine-twinged bowels of Hank Williams. Oh yes, if you want your music covered in Jack Daniels and seminal fluids, Hank is your go-to tour guide.  With the tracks, “I’m Drunk Again,” “Pistol Packin’” and “M.F.J.,” (I’ll leave it up to you to guess what it means) Hank will lead you around the realm of debauchery and decadence. Lick it up.

Back in the ‘90s, Large Professor and Neek The Exotic collaborated for the White Men Can’t Jump soundtrack with the joint “Fakin’ the Funk.”  For those of you that were too young to remember the song or the movie, feel free to find the video on YouTube. Afterwards, go ahead and give this album a listen. It’s the same energy as it was in the ’90s. Though it has been around twenty years later, these cats still flow.