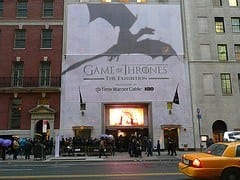 Season 3 of HBO’s fantasy series Game of Thrones premiered Sunday night with lots of competition; between AMC’s The Walking Dead and History Channel’s The Bible, viewers had a plethora of choices.

But a shocking number of them chose Game of Thrones, a show which on Sunday night set two separate records: first, 4.4 million viewers tuned in to watch the premier, the biggest audience garnered by any Game of Thrones episode. Second, over a million people pirated Sunday night’s episode within 24 hours of the airing, and 163,000 were sharing a single torrent—both piracy records, according to TorrentFreak.

Neither record is too surprising. Game of Thrones was the most pirated show of 2012, and 4.3 million people downloaded the show’s season 2 finale—that’s 500,000 more downloads than the second-most pirated show, Dexter, received in total.

When it comes to viewership, Game of Thrones has been watched by an increasing amount of people as the show progresses. A very visible marketing campaign surrounded the season 3 premier, and viewers, not surprisingly, responded. The premier replayed a few times Sunday night, and 6.7 million people watched the episode in total.

That only counts those viewers who watched through HBO. Thousands more watched online live streams or waited to download the episode via torrent.

The cast and crew of Game of Thrones realize the show is being pirated. Strangely, they don’t seem to upset; they seem to have come to grips with the reality of the situation and are looking on the bright side.

“I probably shouldn’t be saying this, but it is a compliment of sorts,” HBO programming president Michael Lombardo told Entertainment Weekly before the premiere. “The demand is there. And it certainly didn’t negatively impact the DVD sales. [Piracy is] something that comes along with having a wildly successful show on a subscription network.”

Co-creator David Benioff just wishes the people pirating the show would pitch in a little for the special effects budget.

“You do kind of think, God, if we just had a little bit of that, we could have had that extra scene with the dragons,” he said.