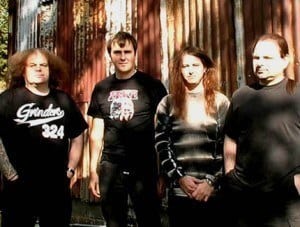 Napalm Death is bringing the pain with “Utilitarian”

First, I want to apologize for not putting something last week.  Damn computer crapped out on.  Hell, it’s still crapping out.  The fact I was able to do this whole thing without it shutting down is a miracle.  But, anyway, let’s get to what’s coming out this week.

With a 30 year history of shows, albums, and tours, the cats from Napalm Death still churning out the most brutal, vitriolic, in-your-face metal your ears to experience.  Melodies?  Ha!  Who needs that crap when you got some atomic blast beats, guttural vocals, and shredding guitars.    Listening to tracks like “Leper Colony” and “Quarantine”-hell, listening to any Napalm Death album – is a portal into the most vile, deplorable, guts of human society.  So check it out when you get the chance.

On the complete opposite of the spectrum is Carolina Chocolate Drops.  The three-piece string band has been the critics’ darling since they dropped their first in 2009.  And I don’t blame them.  There’s something to be said when folks go against the grain on today’s AutoTune landscape.  Though the music is in the old timey category, that doesn’t mean audience will automatically be turned off by this.  “Country Girl” have the band providing a beatbox over the captivating vocals and beautiful string work.

Copywrite’s been a cat I’ve been following for a while.  I remember when he was in the Mhz group in Ohio, firing off similes and metaphors behind beats by a then unknown RJD2.  The style from his earlier works were mostly stuffed with so many battle rhymes, his mouth would have the start of World War III if it was ever unleashed.  He still does, but he has shown growth as an artist over the years, God Save the King being the example.  Copywrite’s clever rhymes are interspersed with thoughts on losing his parents, and spiritual awakening and his love life.

If you’ve been following my column, you’re most likely familiar with Madlib’s “Medicine Show” series.  To the uninitiated, Madlib put out an album a month that feature everything from funk, disco, jazz, hip-hop and everything you can think of.  Number 13 is a thank you to everybody that have listening to the series.  The final entry into the “Medicine Show” is nothing but sick beats and even sicker emcees.  There’s no track titles, so you actually have to listen to the whole thing to really appreciate it.