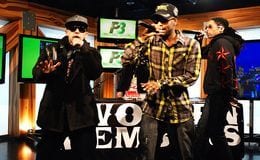 As you know, Lollapalooza is this weekend. Though I’m broke and won’t be able to go, I will be going to the after party that night. I won’t be able to enjoy rubbing elbows with all you sweaty people outside at the gig, but I will be elbow to elbows, nuts to butts inside later on.

As Biggie Smalls once said, “And if you don’t know, now you know.” Swollen Members have been making rumbles in the underground hip-hop scene since their inception in 1999. From then to now, they’ve been hitting fans with their hard hitting rhymes and beats. Take “Mechanical” for example, off ”Monsters II,” which features a crazy guitar/electronic rock mix. The opening track, “Trust,” catches the listeners off-guard with its simple bass and light spotty piano work.

Once again, the Beat Konducta Madlib has conjured up another offering in his supposed once-a-month Medicine Show series. I say supposed because, as you can tell from the title, this is #9 of the series, not #8. What happened to #8? Who the hell knows. What I do know is this is not as out there as some of his previous work, but it’s still bumping and tight as hell. This album features the vocal rhymes of Detriot’s Frank Nitty. It’s nothing out the ordinary, just rhymes about blunts and rhymes. But, done with a Madlib, mad scientist behind the turntables flare.

Manraze is the result of a weird, musical, experiment where Def Leppard, The Sex Pistols, and Girl were thrown into a blender and poured out on stage. The supergroup consist of DL guitarist Phill Collen, Sex Pistol’s Paul Cook on drums and Girl’s Simon Laffy on bass. They’re given you over forty years of experience in these songs, so it behooves you to pay attention and learn something. Like the title suggests, the album is a blend of various style, such as the reggae track “Closer To Me,” or the most traditional rock the opening track “Over My Dead Body.” So, yeah, a little something for everybody.

If you like your electroinc music subdued but simultaneously have sparks of life, check out Machinedrum’s ”Room(s).” Somehow, beatmaker Travis Stewart managed to place soothing vocals, auto-tune and haunting keyboards on top of frantics drums and off-kilter bass kicks. What’s made is a something that’s the musical equivalent to a finely built lady that has the spastic attacks. It’s really something to be heard to be believed. In fact, check out the (unofficial?) video for the track ”She Died There” below and judge for yourself.