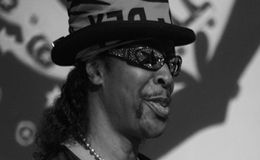 New releases from Bootsy Collins and KMFDM round out this week

For most schools, the spring semester is winding down. As we are preparing for May and the impending summer vacation, we need some auditory help to get pumped up for the summer. With that said, I think I found some albums that will feed that need for speed.

It goes without saying that, if you’re looking to study the roots of blues then look no further than Robert Johnson. The man who supposedly sold his soul to the devil at the crossroads to obtain his talents is being remembered with this two-disc collection. Also, the album is being put out as an early celebration of his 100th birthday on May 8. “Sweet Home Chicago,” “Ramblin On My Mind” and “Me and The Devil Blues” are all here to appease blues veterans and newcomers alike.

Bootsy Collins – “The Funk Capitol Of The World” [Mascot]

You want Bootsy? You got him in all of his drippy, greasy, funky glory. “The Funk Capitol Of The World” will be the Funk Master’s 23rd album and the latest addition to his almost forty-year solo career (and that’s not including the stuff he did with James Brown and Parliament-Funkadelic). The guest appearances on this album are your typical fare: Snoop Dogg, Ice Cube and Chuck D on “Hip Hop @Funk U,” all of whom have sampled Bootsy’s stuff at some point in their careers. But then the album throws a curve and puts in Samuel L. Jackson (“After These Messages”) and Cornel West (“Freedumb [When – Love – Becomes – A – Threat]”) which will certainly be an unique listening experience.

The band that brought industrial music to the mainstream is back again. KMFDM’s previous release, “Blitz,” came out just two years ago, but this German bred band thinks that the public needs more. The band starts things off with “Krank,” with a sinuous moan and a droning bass track. Slowly, they hit you in the head with “Lynchmob” which is just a balls-to-the-wall blast of guitars and screaming that’ll will surely amp up anybody.

Otep has always been one of the few nu-metal bands that I actually like.  While others are immersed in rapping and engaging in frat boy behavior, Otep Shamaya has used the genre to project her feelings toward war, business and the fun stuff the kids are into nowadays. “Atavist,” the band’s fifth album, continues along the same lines including their cover of the Doors’ “Not To Touch The Earth.” They is also a special deluxe edition DVD which includes a short film “Baby’s Breath” — a song on the album — and a few music videos.

A heads up: the following is strictly for the vinyl aficionados. There maybe a CD release soon, but at this time i’ts uncertain.

Here, you have Dennis Coffey who is probably the most prolific funk guitiarist around. He has played for Funkadelic, The Temptations and Del Shannon. He was a member of the original Motown “Funk Brothers” and his solo cut, “Scorpio,” is one of the most sampled breakbeats among hip-hop cats. In a few words, he’s off the chain. In another few words, he’s releasing his self-titled album for his ever growing audience. Tracks like “7th Galaxy” and “Somebody’s Been Sleeping” make people know why he is so popular.

Previous ArticleStaying safe on campusNext ArticleStop and stare at OneRepublic