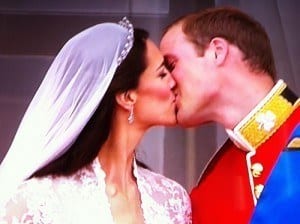 The whole world is officially holding their breath with the new speculation that the Duchess of Cambridge Kate Middleton is due this week.

This information was first released by Camilla, the Duchess of Cornwall, who said that the baby is due by “the end of the week.”

Unfortunately there are others who are disagreeing to that prediction. NBC News’ Royal Contributor Camilla Tominey suggests a different due date.

Because Kate spent this last weekend with her parents in Bucklebury, which is far from St. Mary’s hospital where the baby will be birthed, “that would suggest that she’s at least not expecting her baby to come until next week,” Tominey said.

As the due date of the newest addition to the royal household nears, it’s hard not to fondly remember the day in December when the news that Catherine Middleton was pregnant first came out. She was released into the hospital with morning sickness, which gave away her pregnancy.

As to the official announcement regarding the royal birth? The public might have to wait longer than they would like, as Queen Elizabeth II, British Prime Minister David Cameron, several governor generals of the commonwealth nations and both sides of the royal family will be given the exciting news first.

The birth document signifying the baby’s arrival will be signed by medical officials and driven back to Buckingham Palace (with police escort, of course) where it will reach the first of the many to know of the baby’s birth.

With the baby’s near arrival many celebrities have been commenting on baby names they predict. David Beckham joined in that conversation with a very… interesting suggestion to Sky News. Eyebrows were raised when others heard of the soccer star’s input.

“David’s not bad. I think they should go for David,” Beckham said.

Of course, that isn’t vain or anything…

Despite that curious remark, Beckham didn’t hesitate to congratulate and praise the royal couple regarding their upcoming journey of raising a child and becoming parents.

Kate and William are “going to be amazing parents, because they are so loving towards children,” he said.

He praised William in particular when he bestowed him a very thoughtful compliment.

“William has been in all of our lives for so many years. We have seen William grow from that young boy into an unbelievable gentleman. That’s an amazing quality. And that as a father is so important.”

While the odds of the couple naming their child “David” are slim, there isn’t any doubt when it comes to the expectation that the William and Kate will make great parents.