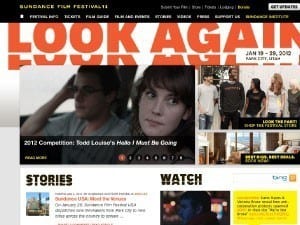 Don’t get Snowed at Sundance

Whether you are a college student, an Independent film fan or a determined young film-maker, the Sundance Film Festival is probably on your list of must do events for the year. Held every year during the end of January, the Sundance Film Festival is probably the largest and most prestigious film festival behind Cannes. Here are some tips on how to navigate Sundance without breaking the bank.

Going to Sundance: Plan Ahead

Ok, while this is really not new advice it really is the best advice for doing Sundance. If you decide to just crash the festival you will find yourself cold and miserable and unable to see any movies. When you are out shopping for college supplies during the end of summer start planning your trip to Sundance for the following January. Every month you delay you can count on the costs of everything doubling every month. Sign up online at the Sundance website for their e-mail reminders and prompts about ticket sales. Online you will also find all the information about navigating the convoluted ticket process.

Start looking for a cheap place to stay now-a year ahead of time. This and your tickets are your largest expense. Sundance (despite the name) is mostly held in Park City. A large percentage of the movies will also play in Salt Lake City (30 minutes away) with just a few playing in nearby Ogden (the Egyuptian Theater in Ogden is fabulous) and at the Sundance Resort. Salt Lake City is far cheaper than staying in Park City. The opening and closing weekends are the busiest. Shuttles run regularly and connect the entire festival.

Going to Sundance: Get a Job

Running the Sundance Festivals takes an army of volunteers, paid and unpaid. These jobs are listed through the Sundance website every year during the late summer and early fall. Some of the jobs are actually located in Los Angeles and don’t require you to be in Utah except during the festival. Other jobs (especially the paid ones) will require substantial training. The perks of working for Sundance include free tickets and an insider’s view of the festival. In addition, many of the resorts in Park City will need additional help during the festival. If you work somewhere else in the service industry contact the biggest resorts (St. Regis, Marriot, Montage, Stein Erickson Lodge and Talisker) and you might just get yourself a job and a place to stay filled with film stars. If you go this route make sure to make it clear you want enough time off to see a few movies!

The Sundance Channel broadcasts events straight into your living room. Moreover, this year they are trying a new outreach program where for one night (January 26th) they are sending 9 of the best films with the filmmakers out across the country. This year the movies are coming to Ann Arbor, MI, Boston, MA, Brooklyn, NY, Chicago, IL, Houston, TX, Nashville, TN, Orlando, FL and San Francisco, CA.

Going to Sundance: Befriend a Local

Locals get the best prices on tickets (the cheapest is $15.00) through the local’s lottery. Currently the local’s tickets to the festival are still checked at the box office for ID rather than at the door. Outside of the festival passes, this is the best and cheapest way to get tickets to Sundance. Oh and you can probably crash on their couch too.

To cut down on food expenses bring a refillable water bottle and a mobile food stash. Eating in Park City is expensive, crowded and most of the menus are set and not worth the money. For good cheaper nosh hit the local cafes in Salt Lake City (Sugar House Cafe, Salt Lake Brewing Company, Coffee Garden for a snack) and food markets (the Park City Market is great in Park City). Go out to some of the smaller trendy restaurants in Salt Lake City (Takashi, Meditrina, Pago, Forage) for outstanding food at not horrible prices.