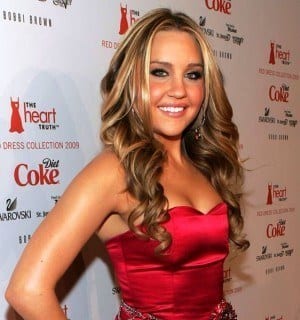 Her dad may believe she’s a “good girl” but TMZ has footage of the actress stumbling out of nightclubs recently.

Amanda Bynes was arrested last week for drunk driving, and now her father is telling reporters that his daughter definitely “doesn’t drink.”

And now, TMZ is reporting that she definitely does.

Amanda Bynes was arrested early in the morning Friday April 6 after she sideswiped a cop car that was stopped at an intersection. She had reportedly been partying all night at a West Hollywood nightclub before the 3 a.m. incident.

Amanda Bynes’ dad, Rick Bynes, told People on Monday, “She was not drunk. I was told that she blew a zero on the Breathalyzer. She didn’t have a single drink that night. My daughter doesn’t drink.”

TMZ has released two videos of Amanda Bynes stumbling out of nightclubs recently, and it is very likely that the 26-year-old former actress was out drinking again the week of her birthday, which was April 3.

“She was upset and very emotional,” Rick Bynes said when pressed for a reason why his daughter hit a cop car.

Amanda Bynes spent several hours in a jail cell before being released, which is standard protocol for suspects who are arrested or drug or alcohol-related offenses until they can take care of themselves.

Later Friday night, Amanda Bynes and several of her friends were turned away from the bar at The Standard Hotel, allegedly because the hotel staff had heard about her arrest and didn’t want to be the scene of another Amanda Bynes crime.