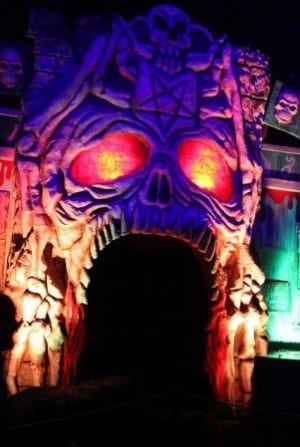 Autumn is here and nothing is better than visiting a pumpkin patch covered in fallen leaves, while sipping your Pumpkin Spice Latte in your comfiest sweater…and screaming at the top of your lungs inside a haunted house.  Each year the quest is on to the find the scariest haunted house around. The haunted house we are most excited to see this year is the brand new Great American Nightmare by none other than Rob Zombie himself! Rob Zombie’s Great American Nightmare is located in Villa Park and is actually three different haunted attractions that feature cutting-edge haunted house technology that promises to “put you in the most immersive experience of your life”. The three attractions are inspired by Rob Zombie’s horror films so don’t be too alarmed when you recognize some of his infamous characters as if the movies have come to life.

Rob Zombie’s Great American Nightmare is like the twisted version of Disney World. How? After all the attractions, step over to Bloody Boulevard where you will meet roaming characters, watch [freak] shows, listen to musical entertainment, and partake in creepy activities, all while enjoying themed food and drink. The similarities are truly uncanny; it’s a small world after all.