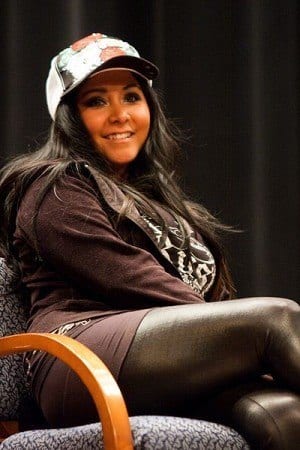 Rihanna’s summer smash hit “We Found Love” earned the Barbadian singer her eleventh number 1 hit on the U.S. Billboard Hot 100 chart, as well as quadruple platinum certification. But now, it appears the single has made Rihanna a new friend and perhaps a baby-sitting side gig, that is, if the whole singing thing does not work out.

Two weeks after giving birth to her son Lorenzo, the “Jersey Shore” star Nicole “Snooki” Polizzi wrote via her Twitter account that “Rihanna’s ‘We Found Love’ will never get old to me. It’s my song for life.”

The tweet made its way through the social media celebrity grapevine to a flattered Rihanna, who responded in 140 characters or less, “Let me know if you need a sitter.”

Granted the sentiment exchanged between Rihanna and Snooki resembles one of good will and perhaps empty promise, new mom Snooki can be sure of the positive support from family, friends and celebrity alike.

Since the birth of her son Lorenzo, Snooki has admitted to leading a relaxing life at home. The “Jersey Shore” star has said that while caring for her son, she enjoys watching TV shows like “The X Factor,” and that “Laying in bed with Lorenzo in my arms is the best feeling in the world.

And in another TMI moment viewers of the “Jersey Shore” have come to expect, Snooki even shared via Twitter that “the breast pump bra is a miracle. Thank you for making it so much easier.”

Snooki, who has been engaged to fiancé of two years, Jionni LaValle, assures fans that she and LaValle are doing well and plan to tie the knot sometime in 2013.

In a conversation with Today Entertainment, Snooki said, “We will focus on the baby first. I want to have the baby, lose weight and have the baby in the wedding.” When asked about her ideal wedding, Snooki said, “I want bombs going off at the reception—fireworks. And I want a princess-type gown with a huge train.”

Who knows, if Snooki’s Jersey-style wedding does kick off sometime next year, maybe we can expect to see a performance/appearance from her new-found friend Rihanna.