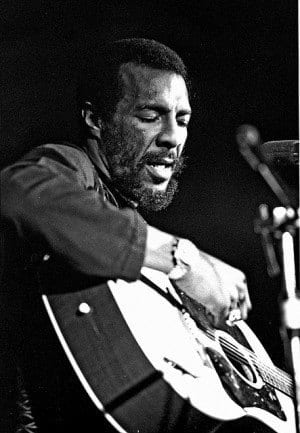 Richie HAven was the opening act for Woodstock and led his audience for more than 50 years.

Richie Havens, who is most famous as the opening act of the Woodstock festival in 1969, improvising the song “Freedom” on the fly, died on Monday of a heart attack at his home in Jersey City.  He was 72.

For our parents’ generation, he will forever be remembered on the stage of the Woodstock festival, which he opened because the band, Sweetwater, which was scheduled to open the festival, was stuck in traffic.  Richie Havens and his crew arrived by helicopter to open the show.  They were originally scheduled to go fifth.

Richie Havens started with “Minstrel From Gault” a few minutes after 5 p.m. on August 15, 1969.  He was originally supposed to play four songs, according to the New York Times, but other performers were later, so he continued playing.   Mr. Haven played ten songs that night, including Beatles songs.

Richie Havens embodied the spirit of the ‘60s until his death. The New York Times reports that he was a regular of Greenwich Village and playing gigs from the Isle of Wight to the Fillmore to Carnegie Hall.  Many rock musicians of the 60s name him as their influence.  His version of “Handsome Johnny” became an anti-Vietnam War anthem.

Beyond the fame he acquired in the 1960s, he went on to record more than two dozen albums, act in movies, champion environmental education and perform at the first inauguration of President Bill Clinton in 1993.  In 2003, the National Music Council gave him its American Eagle Award for his place in the nation’s music heritage.

Richie will be most remembered for the special connection he fostered with his audience.  Richie once said, “If you let the audience lead, then you are the audience.”  He led his fans- in happiness and sorrow, from decade to decade, for more than fifty years.