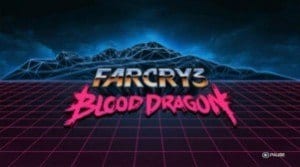 Flashback to a time where everything sucked.

When 2012 began winding down, a shot from the dark took the gaming world by surprise. Far Cry 3 released to impressive reviews and fan applause, presenting a free-roam shooter that put exploration and story progression solely in the hands of the player. With dozens of tasks to accomplish, despite it’s odd, seemingly shallow story, the game still received praise. Building upon that positive foundation, Ubisoft has released Far Cry 3 Blood Dragon. Simply speaking, if you loved all the cheesy, stereotypical parts of the 80’s and you loved Far Cry 3, this game was made with you in mind.

Set in what the 80’s saw as a future-2007, Blood Dragon takes place on a post-apocalyptic landscape where nearly everybody, including protagonist Rex Colt, is part-cyborg. Using stereotypical tropes from the 1980’s, Blood Dragon plays out like an awful, B-list action movie, but does so intentionally. With a cast of characters that is every bit as ridiculous as Rex Colt, the dialogue is asinine; coupled with the classic 8-bit cut scenes that give a nod to the consoles we grew up with, no game has ever embraced or encapsulated the cheesiest decade of all time better. Complete with training montage, gratuitous cursing, and obligatory sex scene, the story pits Rex against the Omega Force, an out-of-control organization bent on world domination.

The gameplay remains largely unchanged from the retail release of Far Cry 3, with only new visuals and a new story being implemented. The Blood Dragon is also introduced, a killer reptile with a penchant for chowing down on the cybernetic hearts you rip from the foes you dispatch. Though combat rewards players with massive XP, players will be far too underpowered to battle one of these beasts until the end of the game. Weapons are limited to an assault rifle, shotgun, sniper rifle, pistol, and bow. Yes, the bow makes a return and, like each of the other weapons, is given a futuristic makeover in order to feel more like the rest of the game, that is: cheesy. Collectibles return in the form of VHS tapes, CRT televisions, and “secret files” that are as silly as they are humorous. With a nod to another Ubisoft series, Rex often expresses his disdain for collecting the items, but his monologue indicates further hatred for collecting flags or feathers, a clear shot at Assassin’s Creed.

Hunting missions also reappear, though on a level far removed from that of the retail release. Simple “track, find, kill” orders are presented and the player is rewarded with attachments for weapons as the missions are completed. In addition to the hunting missions, players will also seek out hostages held by Omega Force and try to save them from certain death. If you’re spotted or don’t get to the hostage fast enough, the hostage is killed and you’re forced to try again. These missions are accepted from the multiple kiosks inside the garrisons that you’ll find and liberate, an identical mechanic to that of Far Cry 3.

Though the story is unapologetically short, the silliness of it all is part of its charm. Some modern-day pop culture references, including annoying memes, are tossed in for good measure, which is a confusing addition considering the apt for maintaining an all-80’s theme. The gameplay offers nothing new beyond some smirks and laughs and by the end of the 8-10 hours it takes to see 100% of the game, even the music will start to wear on you. It’s a nice re-visit to a magnificent game, but unless you loved the 80’s, loved Far Cry 3, and love gameplay that offers no clear point, Far Cry Blood Dragon is not for you.

Disclaimer: This game was provided by the publisher for review purposes and is available on Xbox Live Arcade, Playstation Network, and PC/Steam on May 1, 2013.