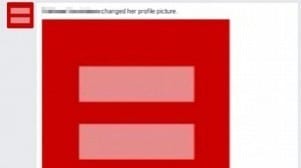 You may have seen some friends on social media changing their profile pictures to a red equal sign, and you may be confused. Where did it come from? What does it mean?

The good news is there are answers. The symbol represents support for gay rights and marriage equality and has gone viral over the last two days as the Supreme Court hears arguments to determine whether marriage should be legally defined as between a man and a woman.

“Follow @HRC on Twitter and at www.hrc.org/blog for live-updates from the first day of at the Supreme Court hearings. Make sure you wear red to show your support for marriage equality. And make your Facebook profile red too!,” reads a post by the HRC on their social media websites.

The HRC’s normal logo is a similar equal sign, but colored yellow with a blue background. But the change in color scheme, to pink and red, seems to have worked. On Facebook, the symbol has accumulated 25,000 likes and 78,000 shares in just two days.

Former Star Trek actor George Takei, who is openly gay, changed his profile picture to the symbol early in the campaign. The profile picture drew over 4 million likes from Facebook users.

“For those friends wondering, this special ‘red’ equality symbol signifies that marriage equality really is all about love. Thanks to the Human Rights Campaign for this effort. Please consider changing your profile today in support—esp. if you are a straight ally,” Takei wrote on his Facebook page.

But not everyone is convinced of the campaign’s effectiveness.

“Hurry up and change your Facebook profile pictures for marriage equality! The Supreme Court Justices are tallying them all up right now,” posted skeptical Twitter user Molly Fitzpatrick.

“Just got off the phone with #scotus justice Scalia. Said he was going to vote no until he saw all the red profile pictures on FB. #pointless,” said Eric Arnold, another unconvinced person who took to Twitter.

But no one can deny that the symbol has reached far and wide. By Thursday, 13 members of Congress had changed their Twitter avatars to the red equal sign.