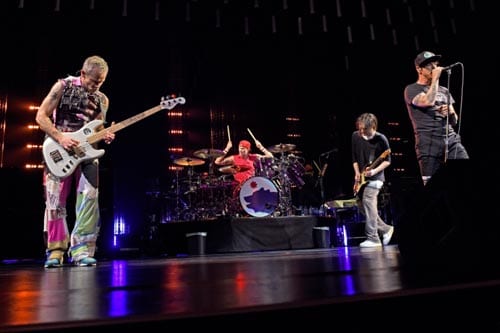 As the new year unfolds, we music fans eagerly anticipate filling our calendars with some great concerts. This includes The Red Hot Chili Peppers, who are out on tour supporting their new album, The Getaway, which features new guitarist Josh Klinghoffer. The Red Hot Chili Peppers are currently selling out venues across the US which included two sold-out shows in Philadelphia, PA, at the Wells Fargo Center.

The Wells Fargo Center was already busy as I pulled into the parking lot, with queues wrapped around the building—the anticipation for a great first night was absolutely underway. Inside, fans were rushing in to scarf-up band merchandise alongside a few ice-cold drinks, ready for a great evening of music. Sitting through opening bands can either be a curse or a refreshing prelude to the main performance.

First up, we had Jack Irons; a well-known individual who worked with both Pearl Jam and was the original drummer for The Red Hot Chili Peppers in the 80s. Irons worked up fans with a great 30-minute instrumental set of dazzling drum percussions.
A quick set change brought us to a stellar performance from Trombone Shorty, from New Orleans Louisiana. I liked the jazz-influenced music that certainly gives that vibe of a jazz festival as the complimentary direct support to the Red Hot Chili Peppers. I would absolutely recommend getting some of their music; it’s refreshing and nothing short of stellar.

The lights went down for the last time as The Red Hot Chili Peppers took center stage for night number one of a sold out Philly-crowd, packed to the rafters deep inside the Wells Fargo Center.

To open the show, Flea and Klinghoffer went head to head alongside drummer Chad Smith, with an opening instrumental jam before diving into their set. The Red Hot Chili Peppers have never been a band to bring with them dazzling stage production. They always keep it simple, yet unique. Many fan-favorite hits we often come to expect to hear during a show seemed to have been left out this time around—except for a few.
I was particularly impressed with Klinghoffer’s smooth guitar playing in The Zephyr Song and Dark Necessities, among other favorites. However, it was a bit disappointing without John Frusciante handling the solos during key songs like Suck My Kiss, Around The World, and Under the Bridge.

Despite the fact that the Red Hot Chili Peppers’ set was only under two hours, they made time to feature some great new tracks from new album The Getaway. These included Go Robot—another great song that never gets boring.
During the show, Flea addressed the fans recalling playing in a small club called the ‘Chestnut Cabaret’ in the 80s. The club is well-known for being a popular playing venue for bands just making a name for themselves back as far as I can remember. The venue has a legacy of supporting many of the well-known bands of today—much like the Red Hot Chili Peppers—who have rocked their way into generations of fans.

Whilst most of the set list moved back and forth between different albums, the show was still raw and well delivered. There was not much talking in between songs, yet the band still gave the audience a great show with high energy ‘in-your-face’ rock.
The last time I was able to see this band was in 2006 for their Stadium Arcadium tour; the last time I would watch John Frusciante play with the band. Even with many of the old classic favorites left out of the set list, such as Dani California, Californication and Roller Coaster, it still was nothing short of greatness.

It’s not often this band comes around on a touring cycle, if you missed the east coast shows, their tour is still going strong. You might pay a pretty penny for a ticket but it’s money well-spent to see a great live band like the Red Hot Chili Peppers.