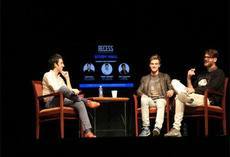 The festival has returned for a fall season

Get ready, college students, for the traveling festival happening this fall that could literally change your life. What was once only a music festival hosted by the Indiana University has morphed into an enormous opportunity to share collegiate ideas and to empower young and entrepreneurial students. Mark Cuban, after haphazardly having been emailed about the original event, decided in 2012 to invest in its well-being. Thereafter, the RECESS festival evolved into a roving business jubilee with an entourage of some particularly impressive names.

RECESS features similarities to the South by Southwest event, mirroring its desire to foster an inspiring environment where innovation and celebration can be successfully united. Co-founder of the event, Deuce Thevenow, described the festival as being geared towards highlighting the next generation of entrepreneurs during the day half, and then scheduled to celebrate the student body’s achievements during the second half. Mark Cuban, star of Shark Tank, is an Indiana University graduate himself, and his involvement with the festival has undoubtedly helped in its surge in popularity and relevancy. L’Oréal Paris shares credit for partnering with the festival to make it a lasting achievement as well.

The traveling festival features four sections of each event, those being Concert, Pitch, Playground, and Office Hours. The concert portion consists of a celebration involving performances by leading artists of the time. Last year Flo Rida, T-Pain, The Chainsmokers, and other superstar musicians made appearances. The Pitch is a business pitch competition, which is a Shark Tank-style affair that gives students the chance to transform their ideas into real, life-changing start-ups. The winning team from each event moves on to a second event held in Los Angeles where they can pitch themselves to major investors and make connections with industrial giants. Playground is a networking fair where students can interact and meet people, and Office Hours is a speech series involving a string of prestigious speakers, including David Grutman and King Bach.

This Fall’s Line Up

RECESS is scheduled to run from October 1st to October 24th, with a variety of different landing zone campuses. Schools that will be visited include the University of Miami, UNC Charlotte, the University of Pennsylvania, Babson College, Harvard, USC, UCLA, SMU, RICE, and UT Austin. The festival is slated to bring once-in-a-lifetime opportunities to active, engaged, and passionate college students ready to shake up the business world with their own ideas and plans.