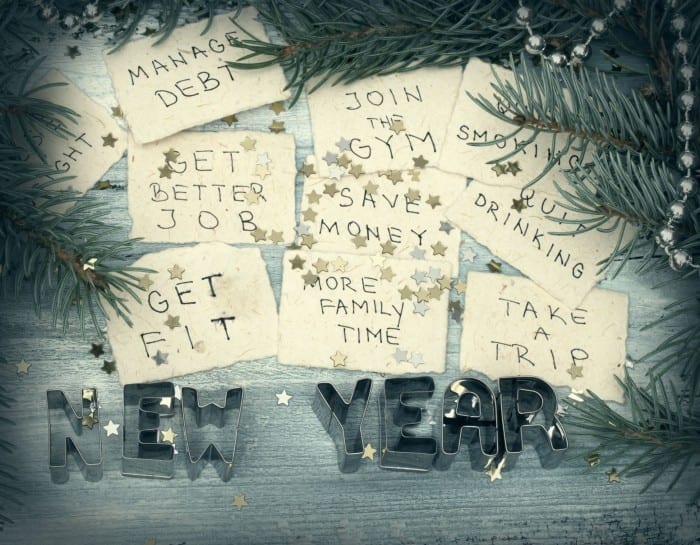 It’s a tired old story, around this time of the year you hear everyone talking about what they’re giving up for the next year, but we have some realistic New Year’s Resolutions for you. It is always something very far away from what the person currently does.  If you say you want to read more books, you probably don’t read anything outside of a magazine or tabloid right now.  If you say you want to stop watching so much TV, you probably have an iPad and a smart phone with Hulu and Netflix.  And then, the best one of them all: The “I’m going to start going to the gym” New Year’s resolution.  The last time you’ve probably saw a gym was when you zoomed past the closest one to your house.  You never actually stepped foot inside it but admire its presence in your neighborhood from afar.

The idea of starting a new year is like a reset button.  We think we can just jump into the things that we know we want to change but that’s not realistic. Psychologists argue that it takes us 28 days (4 weeks) to break a habit.  It’s the method behind Beyonce’s latest diet crazy, 28 days vegan, where by day 29 you will no longer feel restricted.  Your current behavior is already set.  The same thought process should be taken when coming up with things you want to change to better yourself in the coming year.  So here’s my “keeping it real” New Year’s resolution list.

1. Instead of promising to join a gym try following more fitness inspiration across your social media accounts.  There is so many ordinary people (meaning non celebrity types) that document their weight loss progress.  It is a perfect way to stay inspired for 365 days.  By watching others accomplish what you want to accomplish for yourself is a much better push into reality.  I’m sure by mid January you’ll be well into your fitness regimen.

2. Don’t delete your cable account just yet, because then you’ll end up watching television at the gas pump.  You can try something a little less drastic like stopping the reminder emails for latest shows on your Hulu account.  Netflix does it also so you can suspend those as well.  Along with deleting your “Don’t forget to watch” emails you need to find something to replace the time you spend in from the tube.  You can try cooking bigger meals everyday, ones that require multiple preparations.  If you’re not into cooking you can find another home based hobby to over indulge in, like knitting, or scrape booking.

3. Eating healthier is usually a separate resolution then working out or starting the gym because it requires different restrictions.  Either way, you’re not just going to just stop eating that slice of pizza two times a week.  Don’t stop the pizza but try adding a salad.  Yuck, right? There are ways to essentially make anything taste better; You just have to research.  If you incorporate three healthy items to your week, you’ll begin training your mind and body to dislike the fatty greasy foods that makes us feel awful afterwards.

4. Maybe your resolution is to raise your Grade Point Average so; you’re planning to never sleep again.  Wrong, instead of becoming a zombie, remove the distractions that you have during you’re current allotted studying time.  Maybe your roommates play loud music, try studying in the hallway or heading to the library.  You probably don’t need to study longer but need to focus much more.

5. Finding love is another big one, obviously for those who don’t have anyone to kiss at midnight.  That’s all good.  You’ll never find it if you’re looking but everybody needs somebody (cue the Blues Brothers) so try taking different routes to work or to class.  Stop in the other Starbucks, you never know who you might run into.  Dine in new neighborhoods.  Basically, increase your personal exposure level.

In 2016, let us all vow to keep it a little more honest with ourselves and the goals we seek to accomplish.  By taking these steps towards real changes daily, you can eliminate the feeling of failure somewhere around mid February.