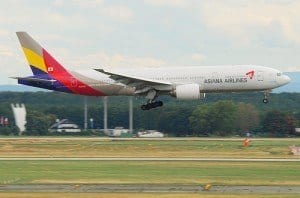 I think it would be safe to say that this incident is everyone’s worst nightmare.

While speculation from the FBI assures that it wasn’t an act of terrorism, they do suspect that the crash may have been a result of the pilot, who was inexperienced when it came to flying the 777 Boeing flight. The pilot did have 43 hours flying similar 777s, but he had never flown to San Francisco’s airport, which may have been the catch.

There may have been a malfunction on the plane, but given the reliability of the plane from previous flights along with Asiana’s clean flight history, it just seems strange to assume that the plane malfunctioned.

Witnesses say that the pilot was flying oddly before prematurely touching down on the runway, which could easily be looked at as a fault of the pilot.

“The nose of the plane was higher than usual for a plane coming in to land and I thought that was odd. It got closer and closer. I saw the back tail hit the ground,” Stephen Dear said.

According to Dear, the plane “caught fire immediately.”

Another source confirms that the plane was at the wrong angle for the landing.

“As we saw the approaching Asiana flight coming in, I noticed right away that the angle was wrong, that it was tilted too far back. The angle didn’t manage to straighten out and the tail broke off. It looked like the plane had completely broken apart,” Stephanie Turner said.

“The flames and smoke were just billowing.”

According to Lee Yoon-hye, a flight attendant who has 20 years of experience flying with Asiana Airlines, the plane tried to take off to retry the landing seconds before the crash.

“Right before touchdown, I felt like the plane was trying to take off. I was thinking, ‘What’s happening?’ and then I felt a bang,” Lee said. “That bang felt harder than a normal landing. It was a very big shock. Afterward, there was another shock and the plane swayed to the right and to the left.”

Records from the flight also show that the pilot attempted to take off again in order to try landing again.

Despite the traumatic circumstances, it can’t be denied that the flight crew performed incredibly. Lee told of several instances where the crew ushered the passengers to safety with admirable strength.

A flight attendant put a young boy who was scared on her back and slid down a slide, and a pilot helped an injured flight attendant get off the plane after the passengers had evacuated. But, a hero herself, Lee helped put out fires and kept cool throughout the entire incident.

“She was so composed. I thought she had come from the terminal,” Hayes-White said. “She wanted to make sure that everyone was off. … She was a hero.”

No matter whose fault the crash was, you can’t deny the courage and humility of the crew, pilots and passengers who lead 305 of the 307 passengers to safety. Hopefully the results will show the pilot innocent regarding this fatal accident. But even if not, we must look upon this incident as just proof that we, as human beings, as brothers, sisters, mothers and fathers have the ability to be heroes. We just have to be willing to step up to the plate.