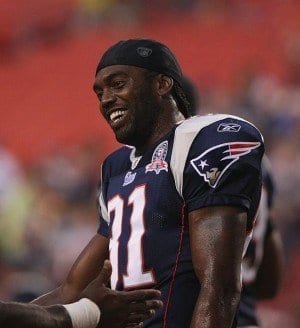 Up for grabs, who wants Moss?

Randy Moss wants to return to the NFL at the ripe age of thirty-five. The former wide receiver announced on his birthday, Feb. 13, via a web cast, “I wanna play football. Your boy is going to come back here and play some football, so I’m really excited. I had some things I had to adjust in my life.”

Upon his return, Randy Moss will be a free agent. But, one question still remains; who wants to pick up the controversial six-time pro bowler?

Moss has stated interest in returning to his former team the New England Patriots, whom recently lost at Super Bowl XLVI. The Patriots current wide receiver Chad Ochocinco failed to make a single catch during the game, while another receiver Wes Welker missed a key play late in the fourth quarter. Former Patriot Tedy Bruschi claims quarterback Tom Brady and Randy Moss had and still have a good relationship, and a return to New England would not be out of the realm of possibility.

However, the elephant in the room is Randy Moss’s attitude and how it’s going to affect his teammates and statistics. Moss has been criticized owners and dropped from teams in the past for his behavior on and off the field, and his most glaring problems came during the last and supposed final season.

Moss claimed to have personal issues affecting his play during his final season. He played on the Vikings, Patriots and finished his career with Titans. His final season ended with a personal all-time low in receiving yards (393) and receptions (28). Given these reasons, it’s no wonder teams might be reluctant to pick up the former wide receiver.

Randy Moss is not all bad though, in 2007 Moss broke the record for most NFL touchdowns receptions in a season (23). He told former teammate, and now NFL analyst, Heath Evans that he currently runs a 40-yard dash between 4.35 and 4.38 seconds. Still quick and confident as ever, is Moss still among the elite in the NFL?

We will have to wait till next fall to find out.