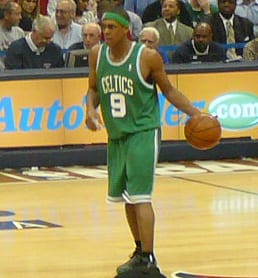 trade talks arise before the deadline

With the NBA trade deadline of March 15 approaching quickly, the Boston Celtics are trying to get rid of Rajon Rondo quick. That’s right, Boston’s fourth leading scorer and one of the NBA’s top point guards is not worth the headache.

The Boston Celtics are having one of there worse seasons in a long time with a record of 17-17 and currently hold the final playoff spot in the Eastern Conference. How will the Big 3 carry on without Rajon Rondo?

ESPN.com released a statement as to reason behind the Rajon Rondo trade talks, “His attitude and personality have become too burdensome for the organization.” It has also been speculated that Boston coach Doc Rivers and Rajon Rondo have butted heads in the past.

There has been speculation of trading Rondo since the beginning of this season, in December, the Celtic’s were in conversation with the Golden State Warriors on a possible Stephen Curry for Rajon Rondo trade, but in the end Golden State backed out of the deal.

Rajon Rondo has played only 22 games the first half of the season, one reason was because of an injured right wrist and the other being a suspension. Rondo was suspended in February for throwing a ball at an official that hit him in the chest during a game against the Detroit Pistons.

Attitude aside though, Rondo is a 3-time NBA All-Star who is averaging a career high 14.1 points a game and has nearly 10 assists per game to go along with that. That must be one big headache he is causing there in Boston.

Rondo has three years and $36 million left on his contract at this season’s end.