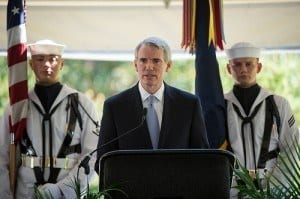 Senator Rob Portman, R-Ohio, recently had a change of heart on gay marriage. His son Will, a 21-year-old Yale student, told his dad that he is gay in 2011. The senator once opposed gay marriage but now says he sees gay marriage in a different perspective.

Senator Rob Portman, 57, said he now sees gay marriage from the perspective of a father who loves his son and wants him to have the same opportunities as his sister and brother and be able to experience the same love he and his wife have shared for 26 years.

The senator wrote an op-ed piece in the Columbia Dispatch, in which he stated that the government shouldn’t deny gays the opportunity to marry. He didn’t forget to mention his previous stance:

“That isn’t how I’ve always felt. As a congressman, and more recently as a senator, I opposed marriage for same-sex couples. Then something happened that led me to think through my position in a much deeper way.”

The Defense of marriage act, which defines marriage as between a man and a woman, excludes federal recognition of same-sex marriage. This denies gay couples of many rights, such as filing joint taxes.

Will Portman congratulated his father on Twitter. “Especially proud of my dad today,” he said.