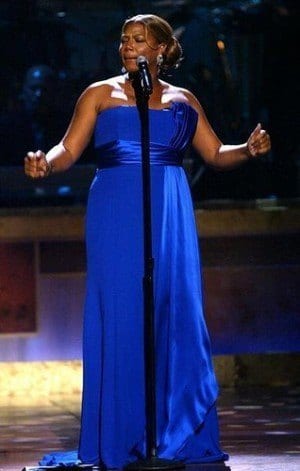 The actress and singer disputes rumors that she came out

Queen Latifah is denying rumors that she came out of the closet last month at the Long Beach lesbian, gay, bisexual and transgender Pride festival. The long-time rapper and actress has battled rumors about her personal life throughout her career, and despite appearing at the festival and connecting with the audience, she claims she did not intend to reveal her personal sexual preference.

Queen Latifah has attempted to keep her private life, well, private throughout her career despite speculation that she is a lesbian. The Long Beach lesbian, gay, bisexual and transgender Pride festival marked the first time Queen Latifah appeared at a Pride festival.

According to the Advocate, on May 19, Queen Latifah reportedly told the crowd that she could “really feel the unity,” which many of the excited fans took to mean she was coming out of the closet and identifying herself as a lesbian.

But, Queen Latifah has stated that that is simply not true, telling Entertainment Weekly that she did not declare her sexuality on stage and that she will not be talking about her sexuality with the public anytime soon.

“I’ve never dealt with the question of my personal life in public. It’s just not gonna happen,” said Queen Latifah.

Queen Latifah has said that she supports the LGBT community, adding, “To me, doing a gay pride show is one of the most fun things. My first show that paid more than $10,000 was in a gay club on New Year’s Eve in San Francisco. When people are going through hatred or bullying, the biggest thing to fight that is love . . . So that’s all I encouraged my audience to do that night: to share their light and share their love. Period.”