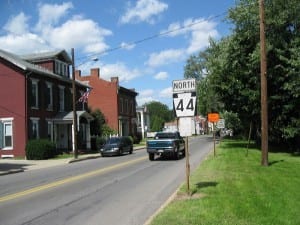 A couple discovered a purple squirrel in their backyard, leading to the squirrel’s internet fame.

The squirrel returned and was in the trap Sunday.

Percy said, “I thought, ‘Nobody’s going to believe me, even the inside of its ears were purple. It wasn’t like it fell into something. It didn’t look like that at all.”

After the couple released the squirrel on Tuesday, the state game warden took samples of the fur that the squirrel left behind inside the cage, in addition to the fur Percy took from the squirrel’s tail.

Percy mentions how the squirrel looked healthy except for having brown teeth.

“I’ve got to think one of the suggestions might be it fell in a Porta John that had blue coloration. I have no idea why…but I don’t think it was born that way.”

For such the unusual color Kacprzyk said, “There are definitely birds that have coloration like this…but not mammals. Mammals don’t normally uptake color, ingest something it goes through and (then) it comes out through their fur.”

The squirrel has become so popular on the Internet that it has its own Facebook and Twitter page.