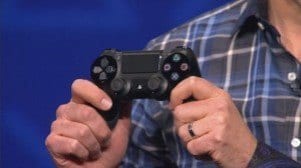 Sony’s new console is pretty much a big ripoff

Sony announced the arrival of the PS4 today, the official follow-up to the company’s Play Staion 3. The PS4 is heavily focused on streaming games and social networking, the company said in its press conference, which means faster download times, an integrated video sharing feature, and the ability to start a game before its download is finished.

But the big new feature of the PS4 is its integration with the PS Vita, which essentially acts as touch-screen controller for the console. If this sounds familiar, it’s because this is exactly what the Wii U is. The Wii U’s central controller, the Game Pad, is a large touch screen with buttons on either side. The PS Vita, Sony’s successor to the PSP, will be used in this fashion as a controller for the PS4, demonstrating Sony’s deft hand at copying ideas that already exist.

The console does have its own new controller as well, not relying entirely on the PS Vita. The new DualShock 4 controller is similar to the old controllers of the past, but with a small touch-sensitive pad in between the analog sticks. It’s not a touch screen per se, which differentiates it from the Wii U in that it’s less advanced, but more akin to a trackpad on a laptop. It makes the controller look really ugly though.

Rumors in the gaming community have focused on a speculated price of $429 and a release date around Christmas 2013, though nothing is confirmed from the company.