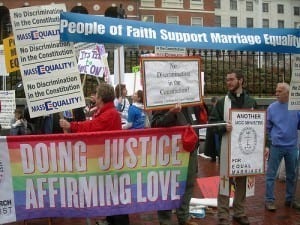 Should heterosexuals and elders be tested for fertility prior to getting a marriage license?

Gay marriage is for gay couples just as heterosexual marriage is for straight couples. How either of the two affect the other is yet to be proven. But still, arguments were heard this morning in a California courtroom on whether or not gay marriage is a constitutional right, specifically referring to the Defense of Marriage Act and Proposition 8.

In 2008, California voters voted for Proposition 8, which banned gay marriage and revoked the marriage licenses of many gay couples who had recently married.

Charles J. Cooper defended the proposition and argued before the Supreme Court that marriage should stay between a man and a woman because gay couples cannot reproduce. He did not however suggest that heterosexual couples be tested for fertility prior to getting a marriage license.

Charles J. Cooper also mentioned that children who are raised by gay parents will experience a disadvantage in comparison to those raised by heterosexual parents. He did not give any specifics as to what those children may suffer from.

Proposition 8 was passed with 52 percent of the vote in 2008. Today, at least 61 percent of California voters are against the proposition that bans gay marriage. About 7 percent are undecided.

Justice Sonya Sotomayor asked Charles J. Cooper what injuries his clients (defenders of prop 8) suffer. Charles J. Cooper replied that it is an “injury to the state” rather than to the individual. His weak and seemingly ill-equipped arguments don’t seem to be convincing the justices.

Former Solicitor General Theodore Olson argued an opposing viewpoint, against prop 8. He too mentioned the children of gay parents who want to see their parents marry. Theodore Olson shared 10 of his allotted 30 minutes with a democratic attorney; David Boies who argued that denies gay couples the right to marry denies them of “equal protection of the laws”.

When Justic Sonya Sotomayor asked if gay people should also be denied of other rights strictly in regard to sexual orientation, Charles J. Cooper said no. He then argued that Prop 8 supports “responsible procreation” to which Justice Elena Kagan mentioned heterosexuals over the age of 55 no longer being able to procreate.

On Wednesday, justices will hear arguments on the 1996 Defense of Marriage Act, which denies federal recognition of gay marriage.