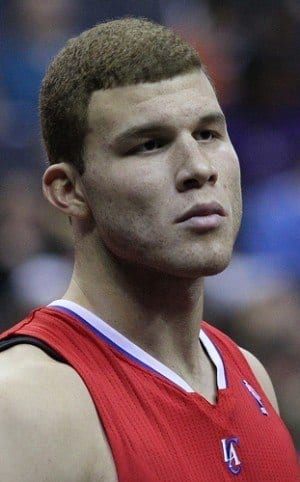 Blake Griffin you ARE the father!

Brynn Cameron gave birth to Blake Griffin’s first child, Ford Wilson Cameron-Griffin, on Aug. 1, 2013. For Cameron, this is child number two, and her second son is also her second child with a pro athlete.

NFL quarterback and Heisman-trophy winner Matt Leinart was Cameron’s first baby daddy. Cameron and Leinart dated while both attended USC. Both were athletes, and Cameron played basketball. Unfortunately, all good things must come to an end and the two college athlete sweeties called it quits. However, not long after the two broke up, Cameron discovered she was pregnant, and the rest is pro athlete baby daddy history.

Her first son, Cole Cameron Leinart, is already 6 years old, and he primarily lives with her. Cameron was apparently raking it in on child support from Leinart recieving a reported $15k a month. As for Leinart, he is currently an unsigned free agent after he was released from the Buffalo Bills.

Switching sports. The LA Clippers’ power forward, Griffin said to the LA Times, “We are very happy to have a healthy baby, but respectfully request to keep our personal affairs private and let us focus on parenting our son,”

What other sports does Cameron still need…baseball, soccer, volleyball, cricket?  Who knows? Let’s not restrict this to solely American athletes. Cameron is en route to raise a team of superstar athletes. Hopefully her sons like sports as much as she does … can you imagine if they don’t?

Rest assured Griffin is single! Proud parents Cameron and Griffin are not together, but with juggling basketball and a new son, Griffin will definitely be a busy guy (but maybe not as busy as his baby mama).