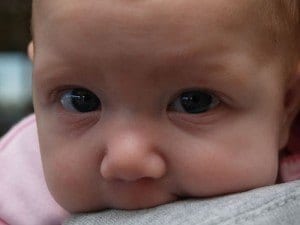 A British soldier, unaware she was pregnant, gave birth to a baby on the frontline

A pregnant soldier went into labor Tuesday and gave birth to a son in Camp Bastion, just days after the Taliban attacked the UK’s base in Hemland. The British soldier reportedly did not know she was pregnant, and after she complained of severe stomach pains, medics informed her that she was about to give birth.

The pregnant soldier, who remains unnamed, was a gunner in the Royal Artillery and has been deployed with the 12th Mechanised Brigade since March. She was in her 34th week of pregnancy, meaning the child was conceived before she left for Afghanistan. The birth has shocked military officials, to say the least, and doctors who helped deliver the baby were surprised at the unusual situation.

“This left us completely gobsmacked,” a military source said. “You prepare yourself for dealing with war-wounded at Bastion—not a mother giving birth to a baby. It is the talk of the camp.”

In preparation for her deployment, the pregnant soldier reportedly had to pass rigorous fitness tests and training, including an eight-mile run with a 25lb backpack. The Ministry of Defense has come out saying that it is strictly prohibited to be deployed while pregnant, that they were not aware that the soldier was pregnant and will be sending the soldier and baby home.

“It is not military policy to allow service women to deploy on operations if they are pregnant. In this instance the MOD was unaware of her pregnancy,” a spokeswoman for the MOD said Wednesday. “As with all medical cases, when the need arises, individuals are returned to the UK for appropriate treatment and care.”

The baby boy was born five weeks premature, but both mother and child seem to be doing well. The John Radcliffe Hospital in Oxford has sent a team of pediatrics to Afghanistan that will help the mother and son on their flight home.