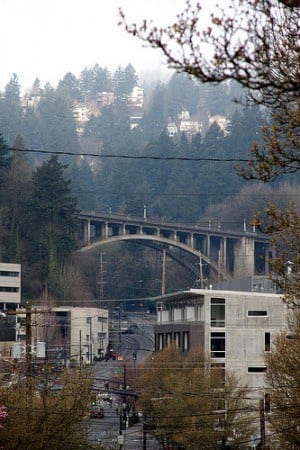 Last week a 15-year-old girl committed suicide by jumping from the arching bridge west of downtown Portland. Last month, a 40-year-old man did the same. And in January, an engaged 19-year-old also plunged to her death.

In response, Portlanders have started an outcry for suicide prevention barriers at the site, Vista Bridge, which has seen no fewer than 17 deaths in the last decade.

Attorney Kenneth Kahn and his wife, a life coach, both have offices that are in a key placement for them to be able to hear the sound of bodies hitting pavement after jumping from the bridge. He said he has discovered the remains of eight bodies over the years.

‘‘Just imagine a human being detonating,’’ he graphically described to Boston.com.

Now the couple is leading a new group called Friends of The Vista Bridge, which is pleading for the city to put up the suicide barriers on the bridge. While this is an ideal end to the mayhem that has ensued, the local leaders have encountered a delay: money. It would cost $2.5 million to set up the appropriate barriers on the bridge.

‘‘We certainly think of it as a high priority, but there’s a whole mess of competing priorities and not much money,’’ City Commissioner Steve Novick said.

Unfortunately there are also many other spans in the infamously known “Bridgetown” that make it possible for people to commit suicide.

But there is hope. The group is seeking to gain a federal grant to get the money necessary for the potentially life-saving barriers.

While the government decides whether it’s worth it to put the money into the preventative barriers, Portlanders will have to wait with crossed fingers under the bridge, praying that no more bodies will make the deathly fall.