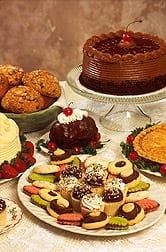 Time to put on the stretchy pants

Fat Tuesday is here again. Today is the day to forget your New Year’s resolutions and, for just one day, indulge in everything you’ve been denying yourself since the coma-inducing overeating of the holiday season.

Fat Tuesday takes root in the Catholic calendar as the last day before Lent, the 40-day period of self-sacrifice, in which something, often a favorite food, is given up until Easter. But Fat Tuesday, and its French translation Mardi Gras, have also become synonymous with the period of Carnival in cities like Rio de Janeiro and New Orleans.

Fat Tuesday is the last official day of the Carnival season. After approximately six weeks of parades and masquerade balls, the season culminates with a daylong series of parades, parties, booze and gluttonous amounts of food.

Today, as many Americans were making their morning commute, revelers in New Orleans were already well into their Fat Tuesday celebrations. There the parties halt normal activity and turn the French Quarter into an array of colorful costumes, marching bands and meticulously decorated floats.

You don’t have to be in New Orleans to enjoy yourself on Fat Tuesday. Celebrations occur all day long throughout the United States, and in other parts of the world, in many forms. Some cities have huge, organized Carnival-style parades, while in other cities individual businesses, primarily bars and restaurants, host events.

No matter where you are this Fat Tuesday, enjoy the carbo-loading, sugar and fats that you solemnly swore you’d give up in 2012. Tomorrow you can hit the gym and resume the calorie counting, but only once a year do we get to celebrate a day that embraces fat and over indulgence.