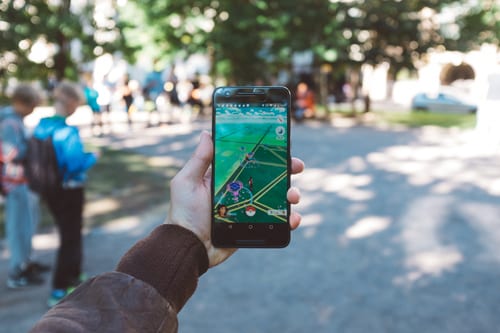 A Review of the Latest Mobile Hit on All Our Phones

You may be asking how Pokémon is so relevant again considering it was first released in 1996 and the popularity of Pokémon has seemed to dwindle in the following years. 2016 marks the 20th anniversary of the video game, and Nintendo, the company that owns Pokémon, decided to celebrate the birthday with a bang: a new kind of gameplay. Pokémon GO introduced a different kind of game compared to the 25 other main title games—soon to be 27 in November. Instead of the standard handheld RPGs we’ve grown so accustomed to, Nintendo partnered up with lesser-known developer, Niantic, to create the first augmented reality Pokémon game. Augmented reality, or AR, accesses the smartphone’s camera to display 3D models of the original 151 Pokémon interacting with the real world around you, allowing you to catch, train and battle with them in real time and in the real world (through your screen).

Read: A Guide to Magic the Gathering

The object of the hit game is simple: Walk around and encounter Pokémon.

The game uses the player’s phone’s GPS to track their movements and steps, and a predetermined code decides whether or not to generate a “wild encounter” for them. Should it, a Pokémon will pop up on the player’s screen and they will have the chance to try and catch it. The Pokémon’s 3D sprite will be transposed upon the camera’s viewfinder showing the Pokémon in the world in front of the player; whether that be the kitchen table, the backseat of an Uber or the boardwalk next to a beach. The possibilities, just like the Pokémon, are limitless.

While this all sounds very fun and innovative…

Many potential players are dissuaded from downloading the free app because, as one friend of mine put it, “I’ve never played the Pokémon games before, I don’t think I know enough to pick this one up”. Don’t let a lack of experience prevent you from joining the party; Pokémon GO is designed to be completely separate from the rest of the Pokémon games and requires almost zero prior knowledge to succeed in. It’s not a limiting or discriminatory game, demographics-wise. Players of all ages, genders, races and anything else are free to play and enjoy.

Whether you’re a college student who’s reliving an old, lost love for Pokémon, a child who’s getting their hands on their first game in the Pokémon franchise, an older player who doesn’t usually play video games or even an experienced Pokémon player who’s discovering a different way to play, Pokémon GO doesn’t care. It’s a fun game for anyone to play—so long as you watch where you’re walking!

New Gamer? You’ll enjoy Hitman: This edition to the series is aimed at new players