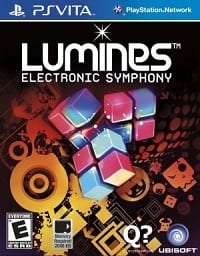 It’s not for everyone, but this hypnotic puzzler is a great reason to own a PS Vita

We heard a great quote on the Vita Voices podcast last month: “The original Gameboy release of ‘Tetris’ doomed all future handhelds to including a puzzle game at launch.” Q Entertainment rose to the challenge admirably with “Lumines” for the PSP in 2005, and now they’re back with “Lumines: Electronic Symphony” for the PS Vita.

The “Lumines” series’ signature is a tripped-out combination of dynamic electronic music and strategic block dropping. Like “Bejeweled” and “Tetris,” it takes an ultra-simple mechanic — in this case, creating 2×2 squares of the same color — and makes it progressively more difficult and addictive while layering in subtle changes to the core gameplay.

Even though it arrives 7 years after its portable debut, the overall package feels less complete than the PSP original. Gone is the diabolical puzzle mode. Gone is the Vs. CPU mode. And the lack of any online matches is baffling. Instead, duels are limited to the “Ad-Hoc” (local) mode. 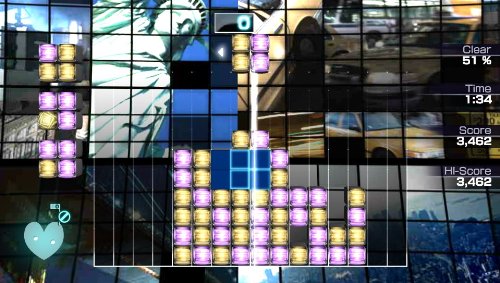 Where the package doesn’t skimp is in the music department. 34 songs ranging from mellow lounge beats to intense techno scorchers like “Hey Boy Hey Girl” by The Chemical Brothers are included.  The music engages you, and combined with the visuals, puts you in a hypnotic state of cerebral enjoyment. It is quite simply puzzle nirvana, especially with the dynamic music shifting and tweaking based on your block movements.

While the suite of features is leaner than expected, what’s here is honed to perfection. A total of 10 distinct Avatar abilities infuse another layer of strategy into the block building, allowing players to conjure up Chain Reaction blocks (erasing all adjacent, similarly-colored blocks) and a Shuffle Mode that can get you out of a game-ending jam by rearranging your block colors. Giant Steps will change your next 3 blocks into single colors, and Hold the Line will stop the time line for a few seconds, allowing you to build a huge multiplier before your blocks are erased.

A playlist mode allows you to zone out with your favorite skins and tracks, and Master Mode pushes your reflexes and ability to think a few moves ahead with five increasingly difficult trials. But it’s the Voyage Mode which is the meat of “Electronic Symphony”, flowing endlessly from song to song, marathon-style, for as long as you can stay alive. Since the order of the skins is predetermined, though, you’ll be tempted to design your own playlists once enough tracks have been unlocked. Which is just fine, since the entire collection of goodies is obtained simply by erasing blocks, trying new modes, and gaining XP.

Instead of being required to reach skins to unlock them during your playthrough, a persistent XP system rewards you with new avatars, skins and songs based on your cumulative score. It’s another nod to newcomers without dumbing things down for talented “Lumines” players.

“Lumines: Electronic Symphony” is one of the best puzzle games around, and a terrific Vita launch title. If you even remotely enjoy puzzle games, pick this one up. That said, it doesn’t mean the game is worthy of a $40 price-tag for everyone, but “Lumines” fans will be utterly satisfied.