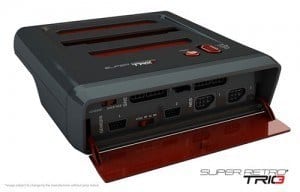 Lately there’s been a resurgence in retro gaming. Many are returning to the consoles and games that they grew up with, while the ones who missed it are starting to peek back at the classics. It’s not always easy to find those classic games or consoles to play them on and, as many will agree, using an emulator doesn’t quite capture the entire experience. Thankfully there’s a device that will help alleviate at least one of your problems. Introducing the Super Retro Trio, a new-age device designed to play your favorite games of yore.

The price is listed at different places for up to $99.99, but for now at least you can score it on Amazon for $59.99, a steal considering what’s included. The Super Retro Trio features three cartridge slots, one for NES, Super NES, and Sega Genesis games. It doesn’t auto-detect which slot is filled, instead relying on the user to select the appropriate system when powering the console on.

The Super Retro Trio comes with 2 controllers, both designed like the ones that came with the Super Nintendo, though they fit in the “Sega Genesis” controller slot. That’s important because on the front of the console are six controller ports, two for each classic console controller, just in case you have some lying around. Admittedly, the controllers are easier to come across for those restocking their classic game collections. Again, controllers aren’t auto-detected and are toggled via a switch on the front. Are you a fan of original Japanese titles? Many are, and thankfully the console allows for games from different regions.

The unfortunate side of the console is the output and display. Despite being a technological feat worthy of all the praise heaped onto it, the Super Retro Trio is limited to S-video and composite (Red, Yellow, White) output. If you own a newer television, and who doesn’t, the image will have dead zones on either side. Some will appreciate the classic feel of the 8, and 16-bit graphics, but it can be a jarring experience if you’re expecting to see it fill your entire screen.

Despite that small piece of nitpicking, the console is an overall delight. It doesn’t use emulator software to run your old games, it simply does exactly what your old consoles once did. It’s visually pleasing, sporting a shiny red and black finish, and when not in use you can flip up the front panel to hide controller ports and random switches. The panel is a bit of a headache to open at times, but considering how little there is to complain about on the console itself, it’s not enough of a nuisance that it will be something you bring up to friends when you brag about it.

If you’ve been thinking about restocking your collection of retro games or have even a passing interest in the hobby, the Super Retro Trio is worth every penny and will be the focal point of your entertainment center.