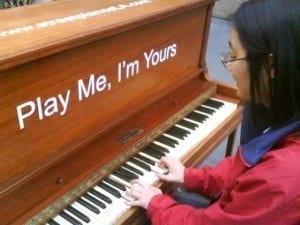 The street painos appear a three-week run, bringing the community together through music

It’s a sunny afternoon at UCLA’s Royce Hall, and everything seems ordinary, with students filing to and from class, preoccupied with midterms and the cost of textbooks.

Everything that is, except for the music.

Dr. Scott Dewey, an Assistant Director at UCLA’s Law Library, sits at a piano beside Bianca V. Hock, a second-year political science student. With an effortless stroke of his fingers, he fills Dickson Plaza with his rendition of Scott Joplin’s The Entertainer. “You want to start out a little slow, then a little faster,” he advises Hock.

As part of a three week run in Los Angeles, British artist Luke Jerram’s “Play Me, I’m Yours” project has placed 30 specially-decorated street pianos around the city, calling for random passersby to follow its simple instruction. Pianos have popped up everywhere from markets to bus stops, from UCLA to its cross-town rival, USC.

Dewey first spotted the piano shortly after it was installed next to UCLA’s Royce Hall. He felt surprised and confused at first but was encouraged by the message “Play Me, I’m Yours” written at the top of the piano.

“It took a little while for people to decide whether it was okay for them to play the piano, but by mid-day, some people had begun to hang around the piano and play it,” Dewey said. He heard different styles of music and playing, from pop to blues to classical. Some people played their original compositions while others improvised.

Despite the occasional memory lapse, the pianists received encouragement and support from the appreciative community forming around the piano. Passersby who hadn’t known each other before began talking with each other, sharing in their enjoyment and appreciation of the music. At least one student wound up skipping class to play the piano and listen to the music.

Since Hock first discovered the street piano, she alternated between playing a few songs to sitting down on Royce steps to listen to people play. She said that the music is a universal language that evokes emotions that words may fail to capture.

“Music on the radio nowadays is becoming more and more electronic,” she said. “It’s a breath of fresh air to have a spot where we can listen to music that is truly produced by people and is completely free.”

Isaac Solomon, a fourth-year math student at UCLA, said it had been years since he’d played until he discovered the street piano. He said the piano provided a rare experience for him to enjoy live music coming from people who can play exceptionally well.

“The street piano in front of Royce Hall did bring people together in a very nice, good-natured way,” said Dewey. “Now I’ve seen it happen, and so I take my hat off to Luke Jerram for coming up with the street pianos idea.”