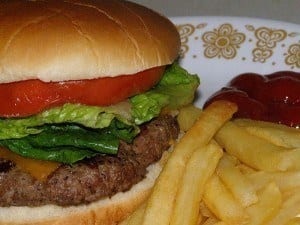 BPI shut down production in three of its four plants Monday… temporarily.

Pink slime is off the menu.

The maker of pink slime, an ammonia-treated filler used to bulk up many processed meats, suspended operations at three of its four plants on Monday.

Beef Products Inc. has seen a decline in business ever since the social media storm hit spreading the word about what is really being used in school lunches. Pink slime was taken off the menus of fast food chains almost immediately after the story broke, and since then several school districts have banned unappetizing processed meat as well.

Craig Letch, Director of food quality and assurance for BPI, said that the company will develop a strategy for rebuilding business and addressing misconceptions about the beef the company makes.

“We feel like when people can start to understand the truth and reality then our business will come back. It’s 100 percent beef,” Letch said.
BPI suspended operations in Amarillo, Texas; Garden City, Kan.; and Waterloo, Iowa. Approximately 200 employees at each plant will get full salary and benefits for 60 days during the suspension, Letch said.

Pink slime has been used for years, but recently celebrity chef Jamie Oliver raised awareness about the product on his show Food Revolution, causing a domino effect that spurred a petition to get pink slime off school lunch trays.

Now the beef industry is mad, and claiming that the media has blown pink slime out of proportion with uninformed stories. BPI has launched a new Web site promoting the safety of pink slime, and other beef industry execs are making statements about the mischaracterization of the products.

“At a time when so many Americans struggle to put a healthy, nutritious meal on their family’s dinner table, the unfounded mischaracterization of Lean Finely Textured Beef as pink slime is unconscionable,” Barry Carpenter, chief executive officer of the National Meat Association said in a statement Monday.

The safety factor of pink slime has certainly been debated, but the greater message in the story is being aware of what Americans are eating. America has gained a reputation for being an obese country, and a big part of the problem is that we don’t know what exactly is in our food. The pink slime controversy is a small part of the greater issue.

BPI has shut down production temporarily until they can figure out a new business plan, or at least a new PR campaign. Pink slime is off the menus for now, but the future of the food industry is still hazy. Maybe this is the beginning of a food revolution, as Jamie Oliver would hope. Or maybe it’s just another over-hyped media story that will fade away in a few months, reappearing for a minor role in the 2012 episode of Best Year Ever.