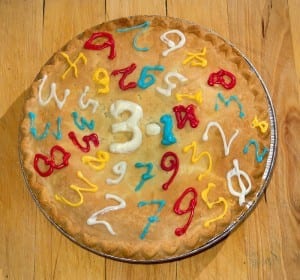 How people across the U.S. can honor Pi Day

St. Patrick’s Day may be just around the corner, but that is not stopping folks from recognizing Pi Day through various events across the country.

National Pi Day is always celebrated in conjunction with Albert Einstein’s birthday on March 14, and serves to promote math education as well as remind students that math is just as important in the real world as in the classroom.

As a refresher to those who may not have seen the popular mathematic symbol since high school, pi is commonly abbreviated to 3.14 and represents the ratio of a circle’s circumference in relation to its diameter.

The first Pi Day celebration was recorded in 1988 at the San Francisco Exploratorium, and the phenomenon has since expanded to museums, schools and businesses throughout the globe.

A couple of unique examples are the Massachusetts Institute of Technology (MIT), which issues its admission decision letters on Pi Day, and 91-year-old major American defense contractor Raytheon, which has previously delivered hundreds of apple pies to math and science teachers within a 3.14-mile radius of the company’s nationwide offices.

But things do not end there.

While the Museum of Mathematics in New York, New York is hosting lectures Friday, certain California locations of Blaze Pizza and other nearby pie shops are selling items for $3.14.

For the more athletically-inclined, Carson City, Nev. and Chicago, Ill. are hosting 3.14-mile Pi Day runs/walks, with Carson City promising a pizza pie slice for all participants and a full pie for the runner finishing closest to 30 minutes, 14 seconds. As an added perk, the Chicago contest will offer discounts to any individuals named Albert, Alberta or Albertina.

In honor of Einstein’s birthday, Princeton, New Jersey is dedicating the entire weekend to pi. A walking tour of the scientist’s former neighborhood and pie-eating contest are just some of the scheduled festivities.

And to celebrate its 26th annual Pi Day, the San Francisco Exploratorium is waiving admission and offering several pi-related activities, such as a pizza pie dough-tossing demonstration. If anyone happens to miss this, other “irrational” events will begin at 8 p.m. SLT. Since pi is considered an irrational number, fireworks and dancing may be involved.

Check your local establishments to see what Pi Day specials are in your area.