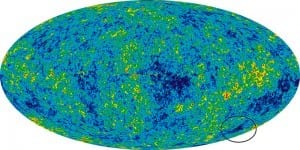 A wave of excited relief has just swept over the physics community thanks to a recent discovery—the gravity of which can hardly be overstated.

The story broke on March 17th, when researchers at the Background Imaging of Cosmic Extragalactic Polarization 2 (BICEP2) experiment in the South Pole announced they had detected a pattern in the cosmic microwave background (CMB) radiation, known as primordial B-mode polarization. This pattern was originally predicted by a physicist named Andrei Linde (who was one of the founders of Inflation theory), which basically appears as a curling in the direction/polarization of light in the CMB. Such a pattern could only have been created by intense gravity waves produced as a result of inflation during the first few fractions of a nanosecond after the big bang. According to Chao-Lin Kuo, a Stanford University physicist who designed the BICEP2 detector, “We’ve found the smoking gun evidence for inflation and we’ve also produced the first image of gravitational waves across the sky.”

While the findings still have yet to go through the peer-review process, experts in the field say the results so far look very promising. Perhaps the most prominent figure in the formulation of Inflation theory is Dr. Alan Guth, who originally proposed the idea in 1980. Thirty-four years after this phenomenon was first predicted, physicists have finally found the hard evidence to support it. Guth says, “There’s a chance it could be wrong, but I think it’s highly probable that the results stand up. I think they’ve done an incredibly good job of analysis.”

A good scientist doesn’t leave much, if anything, to doubt before going public with a discovery of this magnitude. The signal, called B-mode polarization, came in much stronger than originally anticipated, and understandably gave the experimenters reason to suspect an error. In fact, they were so startled by the strength of the signal that they decided not to publish the findings for over a year—during which time they explored all other possible explanations. But when BICEP2’s successor, the Keck  Array, came online and showed the same signal, the scientists felt confident that they had accurate readings.

The CMB is leftover radiation that peaked in the microwave band of the spectrum from when our universe was a mere 380,000 – 400,000 years old—staggeringly close to the instant of the big bang itself. The infant universe was hot enough and dense enough such that photons couldn’t travel freely and uninhibited; reality was just an opaque soup of energy and matter. It then cooled to the point where atoms could form and light was able to travel through space unimpeded, at which point, the blueprint for our current observed universe was laid out. That is what the CMB actually is: the light that has been traveling through space ever since light was able to travel through space.

Since the inflation model predicted B-mode polarization years ago, physicists had a target to aim for in their research. Many different independent teams all over the world have been searching for this unique polarization. Some include: the POLARBEAR experiment led by the University of California, Berkeley; Atacama B-mode Search (ABS) led by Princeton University; the Cosmology Large Angular Scale Surveyor (CLASS) led by Johns Hopkins University; the high-altitude balloon–borne E and B Experiment (EBEX) run by the University of Minnesota, and many more. All of these researchers are racing to confirm BICEP2’s readings, which center around “the value for r”.

Originally, the value for r was predicted to be less than 0.11, based on the CMB maps used at the time. But BICEP2’s readings showed a value of 2.0, which is a significant difference. “Everything hinges on this little r,” Guth says, “and this measurement changes things quite a bit. In fact, the models that looked like they were ruled out last week are now the models that are favored this week.”

Why were gravity waves so sought-after? In short, gravity waves can give cosmologists a picture of the early universe even before the one given to us by the CMB. Unlike electromagnetic radiation, gravity waves could propagate through the hot, dense, opaque infant universe and potentially give us a way to detect the conditions of the big bang itself. This discovery has potentially brought us on the frontier of answering the question, “Where did we come from?”